What is it? Online invoicing software

Small business invoicing is big business. In fact, 1.7m small businesses and freelancers currently bill a total of £275bn a year using paper invoices or invoices created - often somewhat uninspiringly - on Word/Excel. But as any busy business owner will know, a lot of hassle lies therein: the job of receiving payment for services supplied can often resemble an unseemly game of cat and mouse. Irritating, and potentially crippling for a small business.

DueCourse, a financial technology startup based in Manchester, creates and sends ‘smart’ digital invoices that aims to remove that hassle and help small businesses to get paid faster - users can expect to receive payments seven days earlier on average, it claims.

Cofounders Paul Haydock, Jonathon Grove and Tim Borden came up with DueCourse late 2014. Haydock has significant experience in the startup sector already - he co-founded myParcelDelivery.com in 2009 and helped grow it to a £3m turnover before exiting in 2013. DueCourse has been live since late May but was in private beta for a few months before that in order to allow the founders to refine the software.

Users can fully customise their invoices and are able to see exactly when they have been received and viewed online by their customers. The software also allows online payment by card for all users, and if customers haven’t paid the invoice by the time it becomes due, users can choose to schedule automatic email reminders. The software is free to use, and businesses only pay a small transaction fee when invoices are paid by debit/credit card.

A mobile app is currently in development, as well as "revolutionary" new feature, says Haydock.

"We're looking to give small businesses the option to cash an invoice in at any time, similar to invoice financing and discounting," says Haydock. "We've done two tests successfully already, and we'd be the first to offer this service." A screen-shot of a DueCourse invoice

DueCourse raised seed investment to develop the product initially and has recently launched a £1m fundraising drive. "We've found potential investors to be very much London-based so far," adds Haydock, and there's an offer for the whole £1m already "on the table". Despite that, the team is "very keen" to stay in Manchester.

Currently DueCourse can be used in 18 countries but it has users in three or four of those, and around 300 in total. The target for the end of the first year is 3,000 in the UK.

The plan now is to scale up quickly. "We have another developer joining next month and we're looking to grow to a team of 10 by the end of the year," says Haydock. "Then we want to grow it globally." 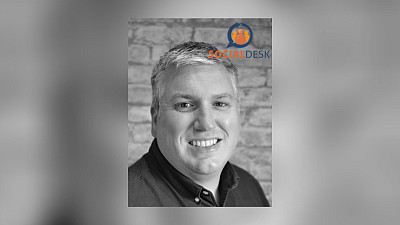