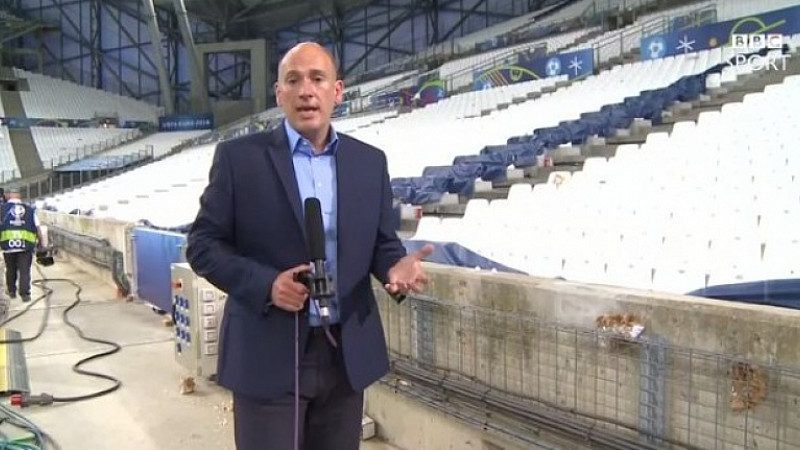 The start of Euro 2016 has proved one of the most politically charged and eventful openings to any major football tournament. BBC Sports Editor Dan Roan has been at the heart of it. He gave Prolific North an insight into how he has covered the big stories on and off the pitch.

This was always going to be a big tournament, because the three home nations are here and there’s a backdrop of security concerns following the recent terrorist attacks in France.

Into the mix has come the extreme violence and disorder involving English, Russian and local fans before England played their opening match.

This meant the angle shifted significantly after we arrived. This is how news works – things constantly shift and you always have to be on your toes.

For example, the day before we flew out to France, one of the most significant figures in the history of sport, Muhammad Ali, passed away. I produced an obituary piece for the Ten O’Clock News, combining archive and tribute interviews, and felt a tremendous duty to do justice to this remarkable man in my four-and-a-half minute piece.

We flew out to Paris on Monday June 6th, and then drove the half an hour or so to England team’s training base, in Chantilly.

When I say ‘we’, I mean my team, who I am very dependent on: my regular producer, Eoin Hempsall, a second producer, Mark Fleming, cameraman Nick Waterworth. All of us are normally based at Salford's MediaCity.

On that first day we produced a piece for the Six and Ten O’Clock News about tournament security. On Tuesday, we did a tournament preview with England players Kyle Walker and Daniel Sturridge.

On Wednesday, I interviewed the Mayor of Paris. And then the violence started in Marseille, the venue for England’s opening match against Russia, and we did pieces on this.

My job requires me to work across television, radio, online and social media, but a key barometer of the significance of an event is always how often we get on the ‘Six' and ‘Ten'. These are the flagship programmes for BBC News and there are only six or seven slots within each programme, so the bar is set very high. We have been on these programmes every day of the Euros, which gives you some idea of the level of interest and significance.

I’ve been the BBC Sport editor since September 2014, and this tournament is right up there in terms of the most significant events I’ve covered.

On Friday, we travelled to Paris for the opening match between France and Romania, reporting from the fan park adjacent to the Eiffel Tower, and I interviewed the head of Europol about security.

Then on Saturday, it was down to Marseille for England’s big match. There had already been trouble in the Old Port area of the city overnight.

For a big match like this, I voice a package about the game, and also appear live (when the presenter in the studio in London throws to me at the stadium).

So I start off by watching the game from the stands, while my producer and shoot-edit sit in an edit truck in the car park cutting the game.

Halfway through the second half, I run down from the stands to the truck and lay down my voice track.

It’s a team effort, so we work together to decide the best shots, the order and the final scripting. There was a late equaliser by Russia in this game, which changed everything and piled on the pressure, but we were OK.

Two minutes after full time, I ran back to the stadium for my live on the Ten O’Clock News. On my way over, I soon realised something big had happened, because I passed scores of riot police and an England fan covered in blood.

I only had seven minutes before going on air to ascertain what had happened, speaking to the Football Association’s head of security among other people for information.

Fortunately, one of the cameramen, who had been in the media seats, had filmed what had happened on his mobile phone.

I was able to watch Russian fans behind Joe Hart’s goal breaking a central cordon of stewards and charging at England supporters, who had fled and climbed over barriers to escape. We managed to also get this footage into our report.

The rush of fans behind goal. See bottom-right of stand, England supporters jumping over perimeter fence in panic pic.twitter.com/4u0GRU3MdR

We were the lead item on the Ten O’Clock News that night, with Lucy Williamson reporting live from the city square in Marseille and throwing to me.

I cued live into my report and afterwards linked to Wales' match report. After that I had to do a third live, talking about what the trouble meant – for England, for Russia and for the tournament as a whole.

You’re talking about a charged situation, so you have to be correct and precise, even when time is at a premium.

Once you’re off air, you are able to breathe a sigh of relief and the adrenaline gradually subsides. Long after all the fans left the stadium, after midnight, we trudged away, carrying our equipment the mile and a half or so through the streets of Marseille back to our hotel.

Next day, we returned to Chantilly, where Roy Hodgson and Wayne Rooney made an appeal to England's fans to behave and where, on Wednesday, we found out that Russia had received a suspended expulsion from the tournament halfway through an England press conference.

Once again, the sands had shifted.

Suddenly we were on the verge of the next hosts of the World Cup being kicked out of the Euros - a huge story. This is already the most politically charged sporting event we have witnessed for some time.

I read all of the newspapers and constantly monitor broadcast, online and social media. My biggest challenge is to keep across the many, varied narratives in sport, flitting between them at short notice, and then actually telling these stories - while trying to break others.

I never forget what an immense privilege it is to covering events such as this, working for the BBC. There is also a great camaraderie in our little team – the closest I’ll ever get to the feeling of being part of a sports team.

I'd soon miss the travel if I didn't do it, but time away from home is tough and I'm indebted to my wife, who looks after our son while I'm away.

When it’s all over, I’ll return home to Manchester and BBC Sport’s base in Salford. And there will be about two weeks until the next big event – the Olympic Games in Rio.