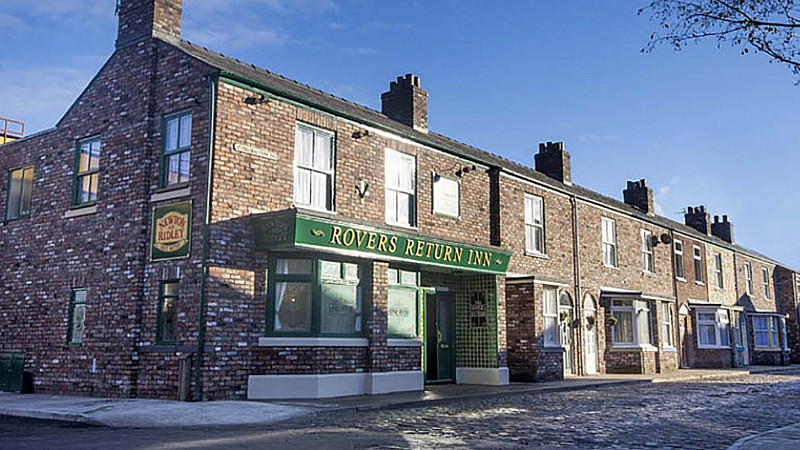 The Queen has walked down Coronation Street to celebrate the soap’s 60th anniversary.

As part of the set visit, The Queen stopped off in the Rover’s Return and met cast and crew to find out how they’d kept the drama on air during the pandemic.

Bill Roache and Barbara Knox talked about the challenges of filming two metres apart while making it look like characters in the same family were much closer.

"It has been such an honour to have Her Majesty here today. The whole team has worked so hard through a very difficult period and it was very special for all of us to have Her Majesty walking the famous cobbles of Coronation Street. It will never be forgotten!” said ITV CEO, Dame Carolyn McCall.

Gifts presented to the Queen included an original ‘Corrie Cobble’ from the set opened by the Queen back in 1981, specially engraved by a local stonemasons; a bottle of 60th Anniversary ‘Weatherfield Spirit’ Gin with a pair of Meehart Manchester Skyline gin glasses; and a bag of ‘Corrie’ goodies.

“For everyone who works on Coronation Street this was a very special and very personal event. We  felt deeply honoured to have Her Majesty walk down the cobbles and visit The Rovers. I hope Her Majesty went away knowing how much her visit meant to us in the North after what has been a very difficult and dark 18 months. It has been a real morale boost for all of us as we come out of the pandemic and look to the future,” said John Whiston Managing Director of Continuing Drama.

“And with so many doors in Buckingham Palace, we hope Her Majesty will find a use for an original Coronation Street cobble. They make very effective doorstops.”

Coronation Street is deeply honoured to have Her Majesty The Queen pay a very special visit to the cobbles today.