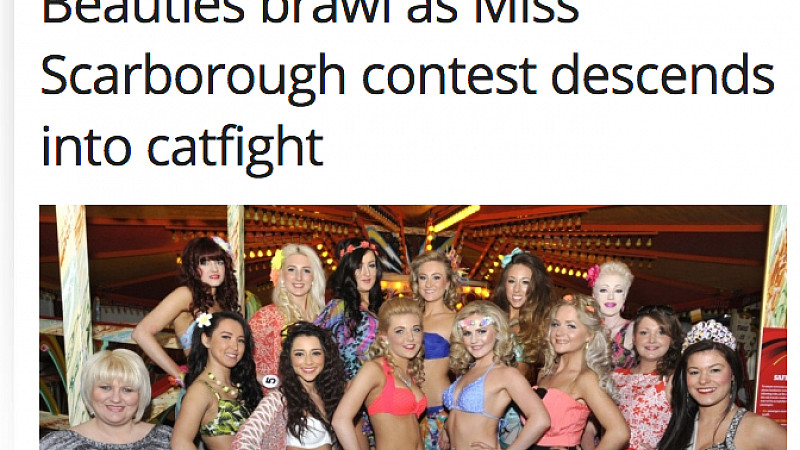 The holiday period always produces some of the quirkiest local news stories so here’s a pick of the five which have caught our attention.

Inevitably, there’s often animals involved and this clutch of strange tales also includes stories of people getting the hump, creatures having the bump and birds getting a jump.

But we’re sure there’s more odd stories to be unearthed so, if your local newspaper’s hiding a gem, please do drop us a line in the comments below, on Twitter @prolificnorth or email sarah AT prolificnorth.co.uk.

Of humps, bumps and ‘virgins’

The most unlikely story of the holidays has to be the report of the ‘virgin’ camel birth. First highlighted in the Northern Echo, this BBC video report explains the ‘mystery’ of the surprise delivery at North Yorkshire farm as Doris the camel follows Maisy the llama into labour. There's even a webcam to watch live now.

From camels to people taking the hump Scarborough’s seaside beauty pageant descended into chaos when the catwalk turned into a brawl, report the Yorkshire Post.
It said a ten-person brawl broke out when ‘thugs’ supporting one of the models accused the Miss Scarborough contest of being ‘fixed’. The troublemakers’ favourite for the crown was eliminated and the crowd started attacking security staff with punches, kicks and handbags. Apparently pensioners were knocked to the ground in the melee in the Mist Bar as teenager Jess Gale, 18, was crowned the winner.

A tawny owl (not likely to be Lucky)

Why flap away when there’s a handy locomotive passing by? The tawny owl, named Lucky by staff, obviously, was found on a Glasgow to Northamptonshire passenger train between the engine and the first wagon. According the The Westmorland Gazette, the bird was looking for a free ride. It reported: “A fare dodging owl travelled 175 miles after it hitched a lift on board a train from north Lancashire to Northamptonshire." Flapping cheek!

Not so lucky, just mysterious A less welcome passenger turned up in a van in Bury. Steve Potter, who found the snake in a hire van told the M.E.N of the moment he found a five-foot long North American Red Corn snake trying to sneak a lift with him.

“When I saw it I was in complete and utter disbelief. Initially I was more astounded than scared but I backed away and closed the door so that I could tell colleagues.”

The creature has since been renamed ‘Mysterious.’ Rob Clayton says he cracked open no fewer than 15 eggs and found they all contained double yolks. The York Press writes that Mr Clayton, who runs the Deighton Lodge bed and breakfast south of York, was cooking breakfast on Good Friday when the “eggstraordinary sight unfolded before his eyes”. He cracked open nine double yolkers and cooked them for breakfast, and then cracked another half dozen and found they were just the same.