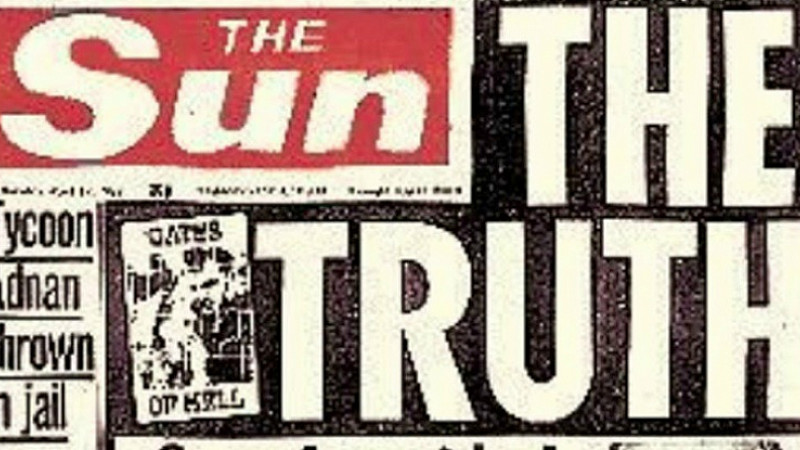 The Sun has come under renewed attack from Liverpool fans in the wake of today's Hillsborough inquest verdict.

The inquest in Warrington concluded that 96 football fans who died as a result of a crush in the 1989 disaster were unlawfully killed.

Large swathes of Merseyside have never forgiven The Sun - and then-editor Kelvin MacKenzie - for running a front-page story headlined THE TRUTH which alleged that the fans' hooliganism was a contributing factor in the tragedy.

In 2004 the tabloid apologised for “the most terrible mistake in its history”, and in 2012 it led with a front page saying “we are profoundly sorry for false reports“.

The Rupert Murdoch-owned national has refused to release a statement today, and former players have reignited calls for Merseysiders to boycott the newspaper.

Former striker Stan Collymore, now a TalkSPORT broadcaster, went as far as calling for The Sun to be shut down in the wake of the verdict, while another ex-player, John Aldridge, who was playing in the FA Cup semi-final at Hillsborough on the day of the disaster, called MacKenzie a “complete and utter disgrace to humanity”.

Here are some of the many other views on Twitter:

Wonder if The Sun will do a front page on the truth tomorrow? #JFT96

I hope the #jft96 triggers a national boycott of the Sun, a truly nasty rag. A mirror image of it's owners and editors. Murdoch/MacKenzie

Time to rid the UK of this appalling toilet roll of a newspaper once and for all @TheSun #JFT96 pic.twitter.com/AUsPKfm4xB

The disgusting lies of those sewer rats who publish The Sun will never be forgotten. #DontBuyTheSun #JFT96 https://t.co/eJXUFccqg2

Shame on anyone who still buys The Sun. Do not buy it. #donotbuythesun #JFT96 pic.twitter.com/FTy9knZvMa

Kelvin Mackenzie watched the horror at Hillsborough & decided to make things worse for the grieving & bereaved. He is still a Sun columnist.