O.J. Simpson, Richard and Judy and my part in an extraordinary Granada scoop 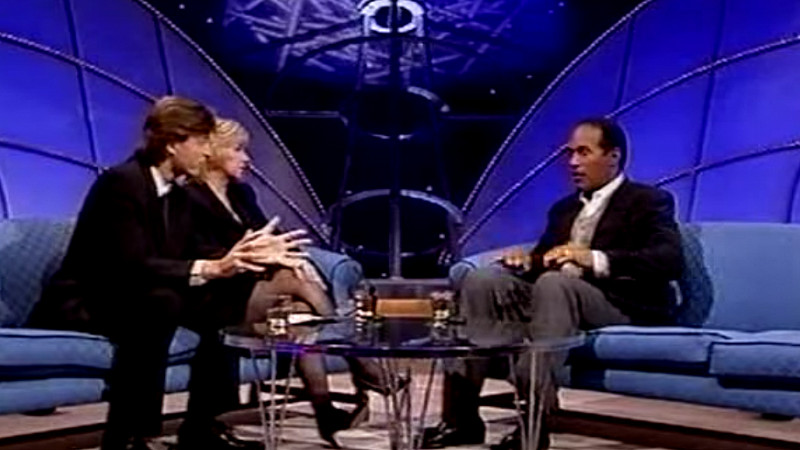 The news that O. J. Simpson has been granted parole after serving nine years for armed robbery warped me back to 1996 when he and I got to know each other.

I’d been placed in charge of the first - and what would be the only - series of an ITV show called Tonight with Richard and Judy. It was a primetime vehicle for the King and Queen of Daytime, hosts of the hugely successful This Morning from the Albert Dock in Liverpool, on which I had also worked. The success of this Monday night 8pm outing would depend heavily on their popular chemistry and the booking of A List guests.

Tonight appeared to get off to a controversial but flying start. Off his own bat, a smart young researcher, a member of a first rate production team, faxed the office of the lawyer of the World’s Most Famous Man Acquitted of Murder. He was Orenthal James Simpson, the iconic running back and movie star who, against the odds, had been found not guilty of the brutal killings of his ex-wife, Nicole Brown, and her friend, Ron Goldman.

The lawyer was Leroy Taft. Would Mr Simpson be interested in telling his story on British television?

Mr Taft and I spoke, during which he asked, “Richard and Judy, they’re like Regis and Kathie Lee, right?” Conjuring up an image of American Daytime’s then President and First Lady I probably said, “Kind of.” Eventually it was suggested that O. J. and I should also talk.

Thus began a series of transatlantic phone calls I made to ‘The Juice’ - at night, because of the time difference between Heswall, Wirral, and Los Angeles, California. I don’t recall how many conversations we had, three, four, maybe more, but I do remember that the ice was easily broken because O. J. and I had a shared interest in the game of golf. O. J. Simpson appearing on the show (above and top)

Like many I’d watched the gripping and often bizarre coverage of the Simpson trial and been surprised by its outcome.

The evidence presented against him on behalf of the People had been compelling in more ways than one.

The bloodied pair of gloves, one found at the scene where Nicole Brown and Ron Goldman, her friend, had been brutally killed, and the other outside Simpson’s home; his peculiar flight in his Bronco SUV that gave rise to arguably the most bizarre, slow motion car chase in law enforcement history; the fresh cuts on Simpson’s left hand; the blood of his type found in the Bronco; the blood that matched Ms Brown’s on his socks found in his home; 911 calls made by Ms Brown in 1993 stating that her ‘crazy’ and ‘ranting’ ex-husband was trying to break into her home and would beat her; the complete absence of any other suspect; and so on and so forth.

We would talk about these matters, but the tone was set from the outset by an unspoken ground rule: that O. J. had been acquitted in a court of law by a jury of his peers that had heard all the evidence and reached its verdict and that was that. Believe it or not, O. J. was innocent.

He certainly talked like an innocent man. What was remarkable was his ability to tell the same story differently, and to flit from one part of it to another as anyone might, and then resume his train of thought.

He was not working from some sort of script. Instead he would make broadly similar explanations of many issues while using different vocabulary and points of reference.

Everything he said on the matter of the murders was part of a rigid belief system in which he had been wrongly accused, possibly framed and much maligned.

I reasoned that a) he might really be innocent, but that this was barely likely; b) that he was a far better actor than his movies had allowed him to demonstrate, with a remarkable gift for improvisation; or c) that his mind was in such a state of denial he genuinely believed that a person or persons unknown were responsible for the appalling crimes with which he had been charged.

This was his fundamental point of view: the legend, superstar, hero and formidable football player that was O. J. Simpson, The Juice, would simply not do such things. It was impossible.

No fit place for the Diamond derriere

So it came to pass that he agreed to appear on our launch show. There was only one condition: that he would speak for no more than 15 minutes and a clause to this effect was included in his contract. We asked the question: “Is 15 minutes enough?” But, let’s face it, a scoop is a scoop and, what’s more, like it or not, we had to make it work - the simple format of this live, half hour show was: Part One, Very Serious; Part Two, Not So Serious. Mark Gorton, who was then in charge of Tonight with Richard and Judy

Either side of the commercial break we had O. J. and evergreen Neil Diamond. Richard and Judy would cross examine Simpson, and then cool down with Neil as he talked about his UK tour before performing a tune from his new album.

What could go wrong?

For a start, Mr Diamond arrived for afternoon rehearsals in Granada Manchester’s Studio 12 and realised he would have to sit on a seat vacated only a couple of minutes before by Mr Simpson. This would not do. I reckon he and his people should have thought about this earlier, but what suddenly appeared to be a Sofa of Evil was no fit place for the Diamond derriere. I took the decision to pre-record his segment, the whole of Part Two, in another part of the set - this way Neil need not even glimpse Orenthal.

This was duly done and worked fine.

At 8pm the opening titles rolled, featuring me, who, as a former presenter, felt qualified to appoint himself Voiceover Man and save some cash to boot. Richard and Judy made their entrance and delivered the intro, linking to the 50-second tape that summed up O. J. Simpson, icon turned pariah. While it rolled our floor manager escorted him to the Sofa of Evil.

We got hammered in the press

What followed was 15 minutes of notoriety that passed frighteningly quickly. In truth, although critics seemed to take the odd view afterwards that Richard and Judy had lamentably matched the failure of the L.A.P.D. to persuade O. J. to confess, many pertinent questions were asked clearly and directly. Nevertheless, despite being occasionally rattled by presenters on the offensive, Simpson was the man I’d got to know over the phone and clearly felt he was on a roll.

When 14 minutes had passed the thought crossed my mind to tell Richard and Judy to go to the commercial break without trailing Neil Diamond, ask O. J. if he was prepared to continue (I believe he would have agreed to), and then resume the interview for the rest of the show.

But, there had been much talk with ITV about setting out our format stall - it was written in stone - and I stuck to the plan. It was part practical decision, part bottling out. Coverage of the scoop at the time

We got hammered in the press. Richard and Judy were accused of being too lightweight for such subject matter - a cartoon depicted them asking O. J. to describe his favourite pizza topping. My son, then 9 years old, who had, for some reason best known to himself, taken to rising early to watch GMTV, woke me to say, “Dad, your show’s a flop.” Not long afterwards I had to appear on Channel 4’s Right to Reply to explain to disgruntled viewers why the interview had only lasted 15 minutes.

In retrospect I should have written the 15 minute deal into the show’s script; at least it would have qualified expectations. In that context it would also have made sense to
put to Simpson the handful of glaringly obvious questions raised by his trial and attempt to deal with them in the allotted time. It might have felt like the pilot of a quiz called Criminal Mastermind but at least the audience would have understood why the conversation ended when it did.

21 years later it’s also time to do some setting straight of the record. In a 2008 newspaper interview, Richard Madeley described the encounter with O. J. as the worst moment of his and Judy’s career. “It was supposed to be a 30 minute interview but was cut down to 8 minutes... Then the ITV lawyer phoned and told us to end the interview. We had to stop it and the live audience gasped. We were slaughtered in the papers, as if it was our fault. I was so angry.”

Much as I admire Richard’s presenting skills and understand his point of view (I was no stranger to sleepless nights before and after O. J.), his recollection was flawed. The conversation lasted the agreed 15 minutes, and there was no phone call from any lawyer.

Could we all have done better? Of course, but there comes a point on a live show of this nature when a course of action is agreed and, to a certain extent, everyone just hopes for the best for content that can’t enjoy the luxury of editing.

But hey, it was only television, where it is easy to forget that there are real human beings enduring real suffering. It would take the persistence of Ron Goldman’s parents, Fred and Kim, to bring a wrongful death civil suit against O. J. Simpson, who was found responsible for the deaths of their son and Nicole Brown.

I was still in a world where Faye Dunaway would refuse to leave her dressing room with just minutes to transmission unless she was brought lemon flavoured chewing gum. (Luckily, Wrigley’s made a banana flavoured gum that did the trick on account of it being yellow.)

Prior to the launch of Tonight with Richard and Judy, I was also being lined up to produce a forthcoming series of The Mrs Merton Show. In the audience to witness the O. J. Simpson special was none other than my future friend and colleague, the excellent Caroline Aherne.

More than a little frazzled I arrived home late and watched the news. Caroline appeared as a reporter asked for her opinion.

She replied, “I think Neil Diamond did it.”

Mark Gorton worked at Granada TV for 13 years before leaving to co-found an independent production company with offices in Manchester and Dublin. 15 years later he joined the BBC for a two year stint, and is now a freelance producer, writer, journalist, and aspiring author of fiction for children.