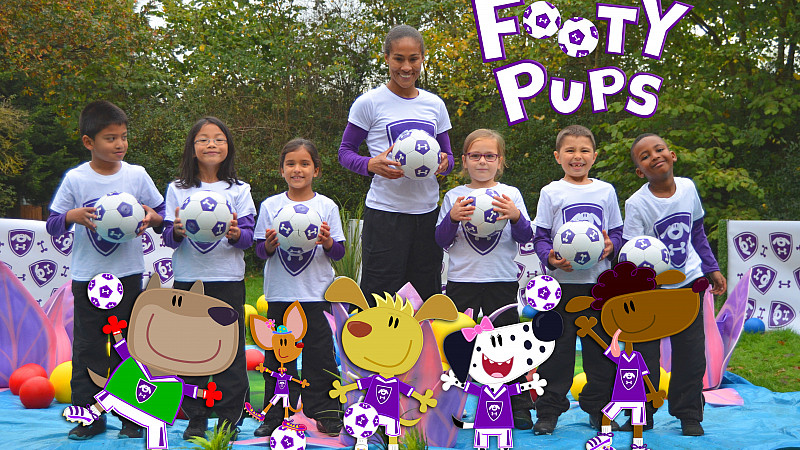 Dot to Dot Productions, which has a base in Wilmslow, has been commissioned by CBeebies to produce Footy Pups, a 30 x 15’ live action and animated series dedicated to teaching children aged 3-6 basic sports skills.

Inspired by a desire to get children interested in sport and exercise from an early age, Footy Pups focuses on football and aims to encourage a new generation of sport’s stars, helping them develop key skills through fun activities and games.

Hosted by one of England’s most capped footballers, Arsenal’s Rachel Yankey OBE, the show’s mission is to put the fun back into kids’ football and celebrate a game that’s all about passing, thinking, developing skills and playing as a team.

In each episode, Yankey teaches a different skill to a group of children and a 5-aside team of animated canines called the Footy Pups. Episodes also follow the pups on a short animated adventure, where they put their newfound skill into practice, competing in an animal league against rival teams such as hippos, ducks and cheetahs.

Footy Pups is Series Produced by Jo Killingley from Dot To Dot Productions and was devised by its head of development, Alan Robinson. It has been commissioned by controller of CBeebies, Kay Benbow, and will be executive produced for the BBC by Catherine McAllister. It is scheduled to air in Spring 2015.

Robinson said: “Through the Footy Pups’ adventures and Rachel’s simple, fun practice drills and games, young players and viewers alike will learn skills for all sports and for life: imagination, co-ordination, concentration and team-work.”