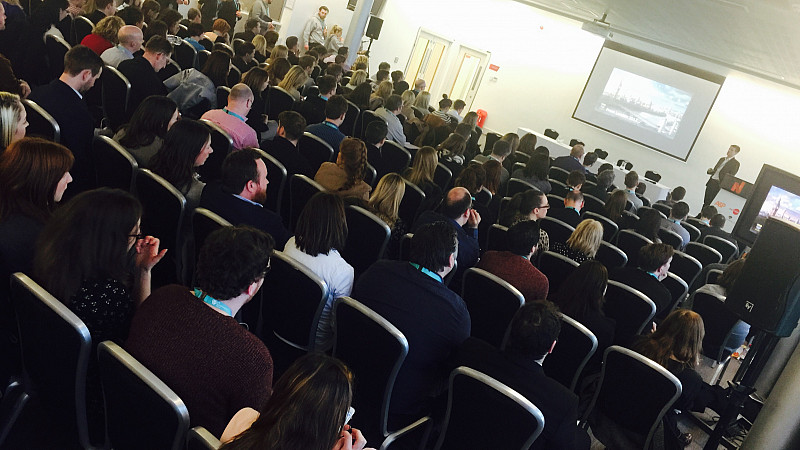 Perhaps it was the dizzying array of stands, talks, workshops, presentations and other sessions taking place within the suites and rooms located throughout the sprawling Emirates Old Trafford.

Or perhaps it was simply the exhilarating opportunity, in our digital and remote world, to talk, shake hands, look people in the eye, enjoy lengthy discussions and make a pile of new contacts.

Either way, judging from the overwhelmingly positive feedback, the day was a roaring success. "Fabulous", "tremendous", "amazing", "wonderful" and "awesome" were some of the many words used on Twitter, but we can't really put it better than Smoking Gun PR's Rick Guttridge, who wrote in a blog:

"Everyone will have their own take on the highlights, but with a great variety of exhibitors from the BBC to Mustard Research (and its delicious ice cream parlour), drone cameras suppliers to virtually every marketing discipline under the sun, added to top notch speakers running all day in the various lecture rooms, there really was something for everyone."

The general buzz on the day was such that the hashtag, #PNLive, was trending on Twitter for over 13 hours. At one point it sat ahead of #PepGuardiola and just behind #Trump.

There were so many highlights that it's difficult to cover them all here, so we'll post a few tweets below that give a good overview of some of the action from the day.

A huge thank you to our event partners once again - Smoking Gun PR, A&P, mclcreate and Steamhaus - and to all those companies and organisations that exhibited and in some way engaged in the day.

We'll be in touch with details very soon of our plans for a TWO-DAY event in 2017.

ProlificNorthLive was created and delivered by Prolific North and Don't Panic Events.

That moment when you wake up and realise that #PNLive is here. pic.twitter.com/FmKMoJuK2a

A fun and exciting day is coming to a close #PNLive... Thank you to all who came along! #havasvillageMCR pic.twitter.com/7O9OZUUMjr

We had a brilliant time at #PNLive yesterday. Thanks to @ProlificNorth @ProlificLive for having us – see you next time!

Thank you @ProlificNorth for a fantastic day yesterday, #expo and various talks and events were fantastic #PNLive pic.twitter.com/JIi67tO4NG

Great company/companies at #PNlive today. We even got a sneak peak inside the Tardis... (Or did we??) #TeamBaltic ✨ pic.twitter.com/amjKjZ07Oo

Brilliant advice from the keynote speakers at #PNLive on how content should be authentic, disruptive and challenging to be effective

A wonderful assembly of an incredibly diverse & talented agency scene. A round of applause for @ProlificLive - they bloody did it. #PNLive

As a parting gift from us, here's a snapshot of everything you've been tweeting about today. Nice work. #PNLive pic.twitter.com/RrKZLuWoBI

Thanks for keeping us all going with @venndigital cupcakes this afternoon! Great to meet you guys :) #PNLive pic.twitter.com/0rEcRMTM1R

Popcorn at the ready - -it's @picturehouses mobile cinema time. Strictly no back row snogging. #PNLive pic.twitter.com/tBDvMrvrJP

3000 registrations, 100 exhibitors, 60 companies, 30 speakers. Who's top of your list at #PNLive? pic.twitter.com/SMcOFA8jeM

So many businesses to have further conversations with, following on from yesterday's @ProlificLive! #PNLive pic.twitter.com/Y4ZEbb7fTd

Had an amazing time @ProlificLive yesterday. Well done to everyone involved. Met some great people & took away lots of great ideas #PNLive

@ProlificLive was fantastic. I left buzzing; a big reminder of why I love my job and the industry I'm a part of. Simply awesome! #PNLive

Good morning, hope everyone enjoyed #PNLive as much as we did! Met some amazing people and generally a brilliant event by @ProlificLive !

Thoroughly enjoyed @ProlificLive. Great takeaways from the talks and exciting chats to be had with exhibitors. Congrats on a great 1st event

Paul Newman from the Peel Group dropped by to tell us about the exciting times ahead for @MediaCityUK. #PNLive pic.twitter.com/LSKLp5I0gZ

Well, what a fantastic day! Lots of lovely people came for a chat! Thanks @ProlificLive for a great event! #PNLive #cantfeelmylegs

That's a wrap! Safe trip home, everyone. See you next time. #PNLive pic.twitter.com/OsGebKrJnL