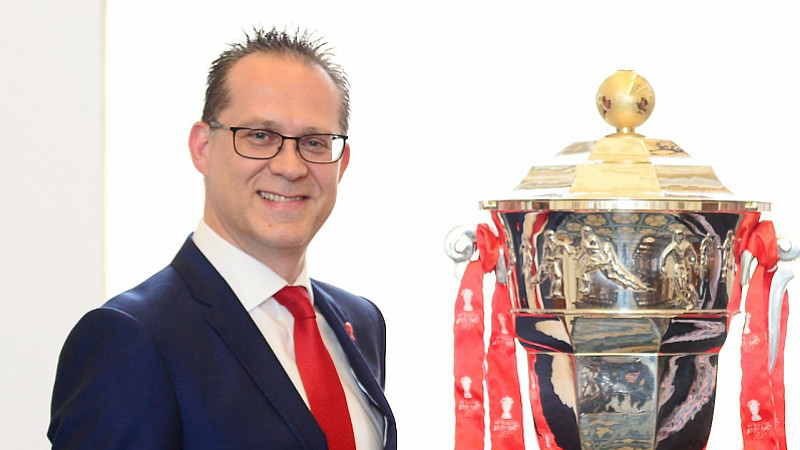 Jon Dutton, Chief Executive of Rugby League World Cup 2021, takes us through a week in his working life - a particularly significant week where the hosts for the tournament are announced.

I woke early ahead of a busy few days. My mind over the weekend had been ticking over non-stop with both excitement and apprehension. Announcing the host venues for Rugby League World Cup 2021 was the biggest milestone of our journey so far. It was incredibly important that we surprise and delight with the announcement, to ensure we cut through to the core rugby league audience.

On Monday, we filmed our BBC broadcast to announce the host cities for the tournament. It was set to be broadcast across BBC online channels the following day to mark the official announcement. So it was a slightly unusual start for me - instead of rushing off to the office to beat the traffic, I had a coffee, pushed emails around and then went for a run. Foolishly, I decided to run a marathon and with time firmly against me, every run was important at this point. It was a very cold but clear, crisp and beautiful morning. I hoped it was an analogy for the day ahead.

I showered, changed and drove into the office at MediaCityUK in Salford. There was an excited buzz about the team as we headed over to the dock10 studio to film the broadcast. I was joined by Jodie Cunningham, who is our Women’s Ambassador and now employee; James Simpson, our Wheelchair Ambassador; and members of our small but outstanding team superbly led by Stephen Brown.

On arrival, we went into the hospitality lounge and were met by colleagues from Hatch, our PR and social media agency. They had been incredibly busy working on this project, to ensure we are were heard in a very cluttered sports and entertainment space.

Rugby League legend Kevin Sinfield, who is our Men’s Ambassador, joined us along with Helen Skelton, who was presenting the programme. After a briefing and rehearsal for Helen, I had my shirt re-ironed (weird), make-up applied (weirder), and then we filmed the programme. The studio was quite amazing, there were lights and cameras everywhere and we even had a black floor onto which virtual reality graphics were applied. Of course, the floor remains bare and black, which just added to the surreal experience as Helen walked around a map that she couldn't see while doing her piece to camera.

The filming went incredibly quickly. We then did various other pieces to camera and popped into the edit suite to see the other video segments that had been filmed.

I left just after 6pm with a huge sense of pride in my team. It felt like a really special day for us and we most definitely had lived our values of being world class, authentic, inclusive and bold and brave.

I had dinner, packed my overnight bag and had an early night ready for the announcement in the morning.

I was up early (as usual), drove into MediaCityUK with a quick coffee stop at Pret, and hopped on the tram to head to Deansgate. We had booked a cinema to share our short film with invited guests, while it was transmitted globally via the BBC website.

My thoughts were focused on the media activity and I was hoping we would get the coverage the team deserves after their hard work.

Guests started to arrive and after checking the film on the screen we were all set. We had a quick briefing with Dave Woods, our host and BBC Rugby League commentator, and then the main challenge was to synchronise our timing with the BBC. We hit the mark and at exactly 9am, the film played on the screen and across the world.

Watching yourself back on a huge cinema screen just adds to the crazy feeling. After the film, in which we announced 21 venues for our tournament in 2021, there was a sense of relief. I made a short speech and then we broke off and into the media activity, starting with a roundtable.

There were questions about whether the new stadium in West Cumbria will be built in time, why Wigan wasn’t selected, why we are going to Arsenal, why we have decided to start in Newcastle, and many more.

We then got a taxi back across to MediaCityUK in the pouring rain and headed into the BBC Studio where James and Jodie joined us and we did radio interviews for BBC Radio Manchester, Merseyside and Coventry.

We all then went in different directions and I headed to Newcastle with Stephen. The weather was pretty bad with a mixture of rain, sleet and snow. I took another radio interview with Radio Cumbria and talked about Workington before we arrived in Newcastle ahead of going to St James' Park.

We met up with Matt Peden from Hatch who looked tired but happy with how the day had unfolded so far. The social media activity had been incredible. We had trended globally and were number one in the UK with BBC Sport, Manchester United, Arsenal and Liverpool FC, all sending out personalised tweets to a huge number of followers.

I had a small window to run. It was bloody freezing but I got a chance to run past my old student house in Fenham - very happy memoires.

I took a quick shower before another radio interview, this time for BBC Radio London. It was then a short dash across the road to be guests of Newcastle United and Newcastle City Council at the game against Manchester City.

It's fair to say that all of the Newcastle partners were so excited about our decision to open the tournament in Newcastle. Its bold and brave for us, but I think it’s going to be incredible.

We walked to our seats and there was a log jam, which means that we didn’t get to take our seats before Manchester City scored within 30 seconds of the kick-off. With Stephen being a huge Newcastle fan, it appeared that we could be in store for a very long night.

We headed downstairs to go pitchside at half-time with another of our ambassadors, Luke Gale, for a photo whilst he addressed the crowd. After the live TV he had done before the game, this just added to the great profile we enjoyed throughout the day.

The second half took a dramatic turn when not only did Newcastle level, but also converted a penalty to win the game. The atmosphere was amazing. I closed my eyes and imagine it being October 23rd 2021, when England start our tournament. Newcastle is a special place.

I had a quick drink - unfortunately non-alcoholic for me - with our jubilant friends from Newcastle, and headed back to the hotel.

It had been a long but incredible day, it didn’t take me long to get to sleep.

I had breakfast in the hotel then took a short stroll through town to the station with Stephen.

The train was packed and slow, but remarkably the weather in Newcastle was much better than Manchester. I spent most of the time on the train poring through the social media analytics, press clippings and broadcast features that Hatch had sent over. It just reinforces what a great job everyone had done.

I also spent too long on Twitter. I would say around 90% of the reaction was positive. Some expected negativity, and also some disappointment about some people’s behaviour and sense of entitlement.

I arrived in Manchester, took the tram to Piccadilly, collected Stephen’s car and headed into the office. The snow was pretty bad - I managed to completely wreck my brand-new shoes by walking from the car park to office with the mixture of salt, snow and ice.

I did another interview in the afternoon followed by pushing emails around. By this point, I felt mentally and physically tired.

It was time to head home, have dinner and get an early night.

I woke up feeling energised and drove into the office for a day of meetings.

More media analysis came through from Hatch which showed the scale of our activities on Tuesday, so I wrote a note to my board to give them an overview, and it was well-received.

I was so proud of our ambassadors. Kevin is well-versed in media work but for James and Jodie it was very new. I then spoke to Andy Wilson, the RFL’s Head of Media, who had arranged media training for both and we both agreed how pleasing it was to see their tangible development since the training.

I arrived home around 6pm, headed out for a run, cooked dinner and settled down with my son Oliver to watch the first Super League game of the season, St Helens vs Wigan. The match didn’t disappoint and was a great start to the season.

Arrived in the office just after 7am. My favourite part of the day - when the office is quiet, which allows time for reflection and preparation.

Stephen and I take our new recruit, Ben, out for breakfast. Ben has joined us in a dual role as Commercial Manager, splitting his time between the World Cup and the RFL. Back into the office for our weekly team meeting. Most teammates are on Skype today, and there is a slightly euphoric feel to the start of the meeting given this week’s achievements. Everyone appreciates that this week is just a milestone and we will be judged during the tournament rather than now, but celebrating success together is a key part of our culture.

More meetings before an impromptu lunch with Ralph, the CEO of the RFL, in the freezing cold reception area of the building foyer. Most definitely warmer outside, so the butternut squash soup was well appreciated.

Managed to get my inbox to a reasonable state and then leave the office at 4pm. I could have stayed longer but wasn’t adding any value.

Cook dinner, then a mixture of the Hull derby and France vs Wales on TV with my son. Also get a chance to watch our broadcast again for the first time since the cinema. I am so pleased that we delivered on every level.

We're in for a weekend full of Rugby. On Sunday, I'll go with Oliver and my Dad to Leigh’s first game of the season. My Dad took me to my first match when I was five so I guess this is my 41st season. In Oliver’s short life, he has seen his team promoted, play in the Super League, relegated and come back from the brink of administration.

It’s been a great week, and the weekend has been a good way to recharge and refresh for another week.

Come Monday, it'll be 992 days to go - our journey continues.

Where I WFH: Darren Ratcliff, founder of Digitl

A Week in My Life: James Napier, Founder, CBN Expert

Where I WFH: Claire Beaumont, Head of PR, Igniyte 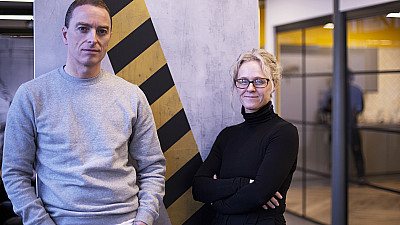 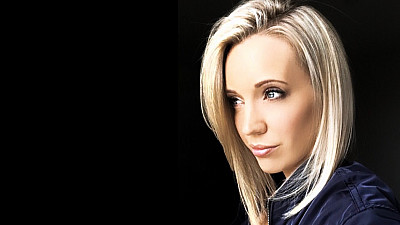 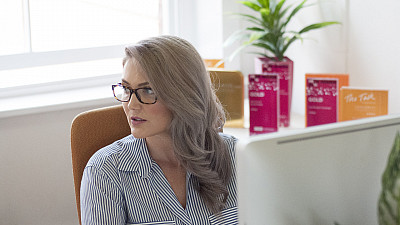 A Week in My Life: Jaime Gee, Managing Director at Jam