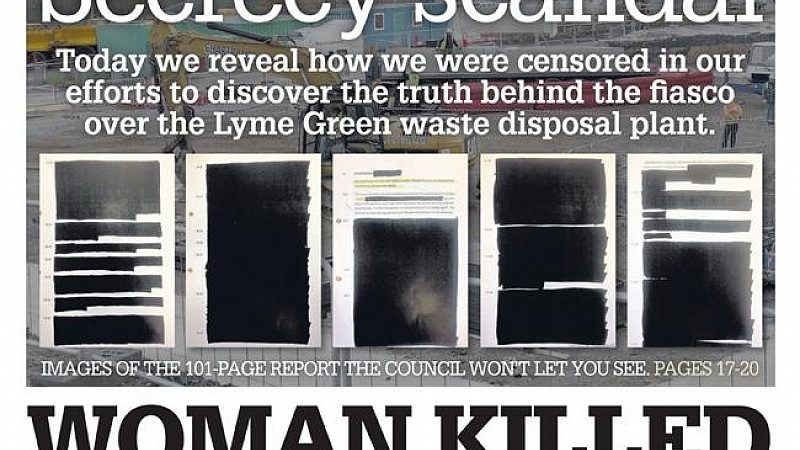 The Macclesfield Express has run a 4-page pull-out claiming that it has been “censored” in a campaign to report on a council decision that cost taxpayers  £1m.

The newspaper has been seeking the publication of a document into how Cheshire East Council began work to create a waste disposal site, before it had been granted planning permission. This meant that the entire project had to be scrapped.

The Express says that the council refused a Freedom of Information request to publish a report about what went wrong, which was commissioned at a cost of £225k. It took the fight to the Information Commissioner’s Office, but received only a redacted version of the report - with “87 of its 101 pages partly censored.”

As a result it put its case before a Tribunal judge who found in favour of the council.

Prolific North is still awaiting an official statement from Cheshire East Council [add - statement is now below in full], however, we were told this morning that the Council Leader was in favour of releasing the entire report, but that their “hands were tied.” It appears that evidence to the report was given during disciplinary proceedings, which are done confidentially and therefore the council fears it could face legal action if they went public.

However, the newspaper has vowed to fight on. "It has been three years since we revealed work had begun on the plant, even though the council had not been granted planning permission,” stated Express editor Gareth Tidman.

"This is unheard of, and to make matters worse, council bosses at first denied that the work had begun.

"The council's reputation has been severely damaged by this whole affair. We believe that publishing the Designated Independent Person report is now the only way to draw a line under the matter and we cannot believe the judge has taken this decision.

"Our appeal was turned down on the grounds that the reputations of those who gave information to the report’s author need to be protected.

"But we believe the need for answers as to how such a large amount of public money went down the drain outweighs all other considerations."

[This article will be updated once we receive a statement from the council].

“We are disappointed that the Macclesfield Express wants to continue with these tactics.

“We have a duty to protect the public purse and so we shouldn’t publish the Lyme Green report in full. We have advice from lawyers saying we would be liable as a Council if we published it.

“In fact, Judge Fiona Henderson said that releasing the report in full would be ‘unlawful and unfair’. She ruled that public interest considerations were not sufficient to justify publication.

“We have also been told we have done more than we needed to by releasing the extensive report by Kim Ryley, our former Chief Executive, even in redacted form.

“We have learned our lesson and the council is now more open and transparent than ever before.

“I want people to know that I personally would love to publish the report in full because we have nothing to hide. But I cannot and will not expose us to the risk of legal action, the cost of which would fall on Council Tax payers.

“A lot of high-level changes were made within this authority after Lyme Green. I am yet to hear of any other local authority where such action has been taken.”