Uniform explores what Met Office data could sound like 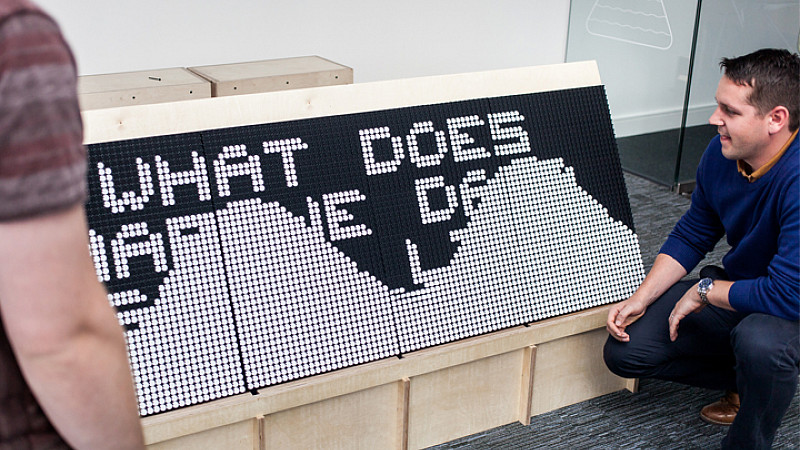 Uniform has been working on a project with the Met Office to turn its data into an audio-visual installation at the V&A. Part of the Design Festival’s Digital Weekend, the Liverpool agency used flip-dot technology to turn real waves into digital ones.

“One of the most interesting things to come from our conversations was the unseen work that goes on. Away from the traditional weather forecast the Met Office is a hive of activity. They have an open data resource called Datapoint that captures real time data from a surprisingly vast network of sensors. In particular, hidden off the coast of the UK is a network of buoys and light vessels creating marine data, 24 hours a day,” explained Uniform’s Vicky Pennington.

“Refining our idea we started to think about what makes flip-dot different from a modern LCD display and the answer was right in front of us ‘click, click, click.’ The distinctive noise the disks make as they turn over and hit the magnet. We wanted to use this to ask the question what does the ocean around the UK sound like? And how do we bring this data to life in a beautiful way?”

After going through several prototypes, they opted to retain the low resolution display of the flip-dot, but one of the biggest challenges was to create a generative wave form that represented a real wave at the different buoy and light vessel locations.

“We settled on a Perlin noise algorithm which allowed us to represent the wave height, wave period and the wind speed,” she continued.

The end result can be viewed in the video below.