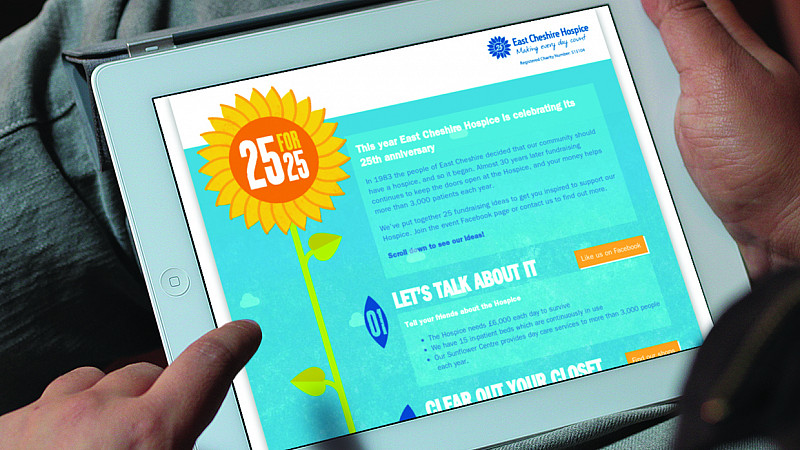 Macclesfield agency Vibe has teamed up with East Cheshire Hospice to deliver its community campaign, 25 for 25.

Celebrating the 25th anniversary of the hospice, the campaign includes 25 different activities for locals to take part in to elevate the charity’s profile while boosting fundraising. Activities range from hosting a bake sale to organising charity car washes. Vibe was appointed to create collateral for the campaign, which involved establishing the campaign’s identity, developing printed applications, and creating a standalone microsite linking to Facebook to encourage social interaction with the hospice.

Dan Mellor, designer at Vibe, said: "We wanted to create a vibrant campaign that focuses on getting the local community to engage with the hospice’s fundraising activities, while allowing volunteers to be creative and share their success stories.

"The campaign reflects these values, taking inspiration from craft and screen printing techniques while incorporating a tweaked East Cheshire Hospice colour palette to bring a sense of fun and vibrancy. The campaign’s logo is based on a 25 petal sunflower and incorporates elements of the existing hospice imagery to ensure that the campaign has strong links to the core brand."

Amy Willis, fundraising manager at East Cheshire Hospice, added: "We’re delighted with what Vibe has produced for the campaign. We explained to them what sort of look and feel we were going for, and the team were able to pull together a creative campaign from scratch – full of exciting imagery and engaging messages."

Vibe has recently been involved in briefs for the Silk Street scheme, Mark 1 and V1.