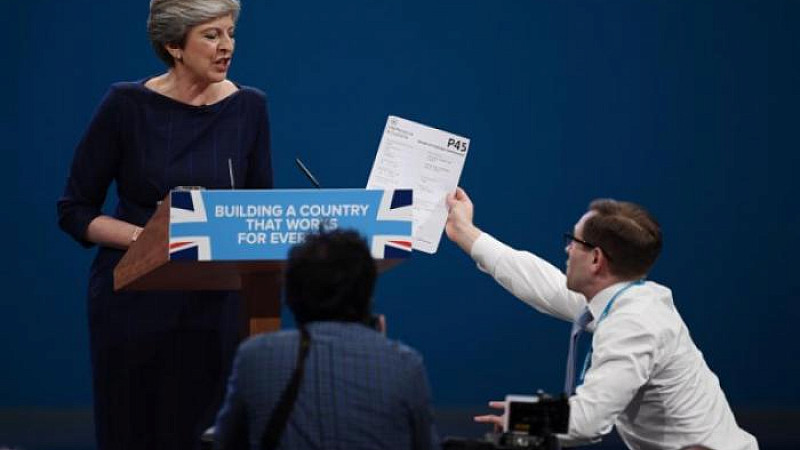 Comedian Simon Brodkin has struck again, handing Prime Minister Theresa May a P45 during her speech at the Conservative Party Conference in Manchester.

The Manchester University graduate, who used to work as a doctor, said “Prime minister, Boris told me to give you this” as he handed May the P45.

May carried on with her speech, stumbling momentarily, and took the letter before bending to put it on the floor.

Brodkin then approached Foreign Secretary Boris Johnson to give him a thumbs up and say “Boris, job done.”

As he was marched out of the hall by police, Brodkin told the journalists who surrounded him “Boris told me to do it” and they seemed to believe it.

The comedian was later arrested to prevent a breach of the peace and released shortly afterwards.

Patrick McLoughlin, chair of the Conservative party, said there would be an investigation into the security breach.

A picture of the “P45” posted by ITV political editor Robert Peston, showed the reasons for termination, supposedly by Johnson, were “neither strong or stable” and “we’re a bit worried about Jezza”.

Brodkin has carried out a series of stunts against high-profile figures.

In June 2016, at the reopening of Donald Trump’s Turnberry golf resort in Scotland, he hijacked the then US presidential candidate’s speech with golf balls emblazoned with swastikas.

In September 2016, he hung a banner on the businessman Philip Green’s £100m superyacht Lionheart, which read “BHS Destroyer” in reference to the collapse of the retailer.

And, most famously of all, in July 2015 he gatecrashed a press conference at the Fifa summit in Zurich, held amid the world football organisation’s corruption scandal. He walked on to the stage and threw a wad of US dollar bills over Blatter.