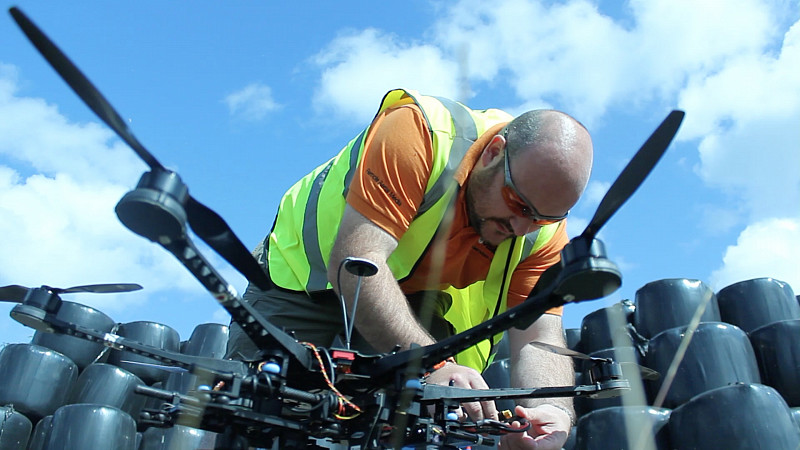 Drones. Even the word has something of menace about it. A mechanical wasp, hovering with some sort of malevolent intent, operated by remote distant operators with unknown levels of compassion.

Or at least that’s how TV shows such as Homeland portray the armed type of drone, a weapon of war that has little in common with these new tools of journalism aside from a shared abbreviated and catchy name.

The regular use of the term to describe flying cameras probably owes more to the macho eagerness of the journalism world to adopt a military-like word than it is an accurate description of the technology.It’s certainly not the only example of such language adopted and adapted from military-speak - photographers shoot people, don’t they?

Unpublishable stories are killed or spiked, trainee cameramen are encouraged to kill their babies. Ultimately, Unmanned Aerial Vehicle (UAV) doesn’t have quite the same ring about it when it comes to headlines and soundbites and so the drone journalism tag will surely persist and become increasingly commonplace as the practice develops.

We’re already seeing the use of drones proliferate across a whole variety of stories - from incredible imagery of the vastness of the natural world to investigations that couldn’t be told with conventional cameras, to views of the inaccessible right under our noses.

During March, for example, the BBC was allowed to fly a remote-controlled camera along the tunnels of Crossrail, the giant building project that will eventually see trains criss-crossing London and the south-east on a brand new railway line.

In Kenya, cameras were able to get these incredible shots from being up close to the wildlife shot here between Amboseli and the Mara.

Even local newspapers are starting to use them, as this coverage of a fire at the city’s dogs home from the Manchester Evening News demonstrates to dramatic effect.

One of those at the forefront of this emerging form of storytelling is Paul Egglestone. A former TV producer, he now runs the Media Innovation Studio at the University of Central Lancashire (UCLan) in Preston and is developing a course module to train the drone journalists of the future.

The module, the first of its type in the UK, will involve an external organisation authorised to deal with the students’ pilot licence requirements.The current rules for the UK mean that a Civil Aviation Authority (CAA) licence is required to operate a drone - but this requirement is expected to be subject to change as the authority becomes increasingly inundated with requests as the price of the technology tumbles.

The current state of the law - both legislation and court decisions - is poorly suited to deal with the sort of persistent surveillance made possible by drones.

In the US, journalist Matt Waite writes about issues around the use of drones and in a recent newsletter he urged journalists to respond to the proposed rule change that has already seen several thousand people move against tightening the rules.

People there had until April 24 to file comments to the FAA on the Notice of Proposed Rule Making (NPRM) on drones and Waite warned journalists in other countries to be vigilant: “If you haven’t noticed, I think journalists in the US should be doing this. For those of you outside the United States, watch this closely, because civil aviation authorities all over the world copy each other. And keep an eye on what your own civil aviation authority is doing.”

But Egglestone reasons that more regulation is unlikely here. “The Civil Aviation Authority is receiving far too many applications from people. It’s likely they’ll move towards people organising themselves when it comes to flying under 400 feet. “This is a very dynamic environment, legally, and then with the drones themselves becoming more robust and stable and, as they do that, the rules and restrictions are likely to relax more.”

Students at UCLan are receiving training that covers the technical aspects of operating the equipment as well as the journalistic ethics of their use.The rules are strict - a drone operator needs to keep the machine in their line of sight and within 1.5km when measured horizontally, they need to keep below 400 feet and cannot operate multiple drones. They should wear hi-viz clothing and mark out the flying area with cones.

Then there’s also the paperwork, including a logbook of all flights undertaken.

Qualified pilot James Boyers, of Bolton creative agency Portfolio Design, says the licence requirements are similar to those undertaken by pilots of manned aircraft. He also notes the growing interest in the use of drones - when he first started flying, there were maybe a handful of pilots in the UK. There’s now believed to be at least 450.

“I started five years ago, as a hobby more than anything. Early on there were just small cameras working that were not quite good enough to operate for commercial work, but in the last three years that has changed altogether. You have to be able to interpret nautical maps and weather patterns. There’s a ground school course and quite a lot of the classroom work to be done.”

Technical proficiency is, of course, just one part of the equation when it comes to the journalistic considerations. As KK wrote in the March 19 issue of The Economist, the current state of the law - both legislation and court decisions - is poorly suited to deal with the sort of persistent surveillance made possible by drones.

“This is because privacy law is tailored to questions of whether one is in public - an open field - or in a space where one has a ‘reasonable expectation of privacy’. Complicating matters, there is no clear line between episodic surveillance - a snapshot - and persistent surveillance, even though the effects are profoundly different.”

“Ethics is always an interesting discussion and debate in class,” says Egglestone, “as we start to ask about the differences between using a drone to take an aerial view of something versus say using a step ladder and a long lens. We’ve all seen those shots looking down at festivals for example - they are mostly illegal as things stand.”It’s a point well made.

The new technology hasn’t necessarily raised new ethical dilemmas, although it’s brought existing ones into sharper focus, with many more iterations of the rules and legal cases to establish case law undoubtedly on the horizon. Will the future issues arising with legislators make a distinction between the use of technology for journalism in the public interest, as opposed to use by government agencies and authorities such as police forces, for example?

When it comes to equipping the next generation of journalists, Egglestone sees the use of drones remaining as a relatively specialist area, albeit one with growing interest.

“It’s another tool in the box. I don’t think we are going to approach the time when everyone carries a drone just in case, but there will certainly be specialist camera crews that acquire a drone for themselves.”

* This article was first published at the independent journalism network Contributoria.com where it was commissioned by IFEX.