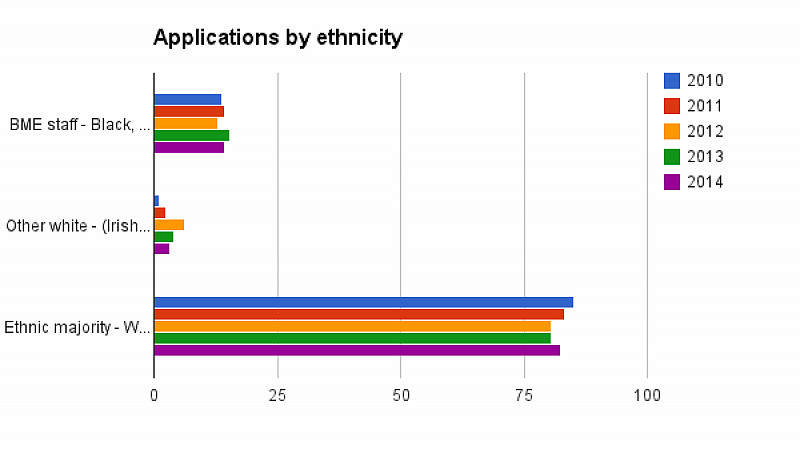 BBC North attracts a far lower percentage of applications from people from black and ethnic minority backgrounds than the corporation nationally, we can exclusively reveal today.

Information revealed via a Freedom of Information request shows in detail the number of applications, and perhaps more importantly, appointments made at BBC North over the past five years.

And while nationally, the BBC attracts around 26% of applicants from Black and Ethnic Minority backgrounds, here in the north it achieved just 14.1 % between 2010 and 2014.

As we release these findings today, the BBC’s director general Tony Hall, announced new measures to improve the representation of the Black, Asian and Minority Ethnic (BAME) community, including a new executive development scheme and a ringfenced commissioning fund. Of those who apply, a smaller percentage are eventually appointed to positions - a situation which hit a particularly low point in 2012. Measures announced by Hall today include more training internships for BAME graduate trainees, an assistant commissioner development programme for people from diverse backgrounds and new on- and off-air diversity targets. Hall said he would be chairing a new independent diversity action group to advise the BBC with a panel of experts featuring actor and comedian Lenny Henry, an outspoken critic of the BBC in recent months over its failure to promote BAME diversity.

“I want a new talent led approach that will help set the pace in the media industry. I believe in this and want our record to be beyond reproach."

“That won’t be achieved overnight, but the package of measures I’ve put in place, alongside the support we’ll get from leading experts, will make a tangible difference. We will review progress regularly, and if we need to expand our approach even more, then we will.”

The BBC issued this statement in conjunction with the data: "Diversity is an industry wide issue and the BBC is leading efforts to address this both on and off screen. At entry level, our partnerships with the Stephen Lawrence Charitable Trust and the Mama Youth Project have brought talented young people from diverse backgrounds into the

"BBC this year and 38% of our current Production Trainee Scheme are from diverse backgrounds. But we know we have work to do at all levels so we’re also running initiatives to mentor and develop existing staff to ensure our future leaders are representative of our audiences. On-screen, our latest data shows that we have made progress. New training days for presenters and contributors will help increase this further.

"We are determined to continue to listen to our audiences and staff, using that feedback to help inform our strategy."

The Equal Opportunities Commission said it was unable to comment on the specific case but added: “Without commenting on this specific example, in general, there is a good business case for organisations to employ a diverse workforce, which utilises the talents and skills of Britain’s population. This can increase efficiency and effectiveness, enable the organisation to be more innovative and adaptable and also draw it closer to its customer base.”

* You can explore the full data set - which also includes breakdowns on disability and gender - here.