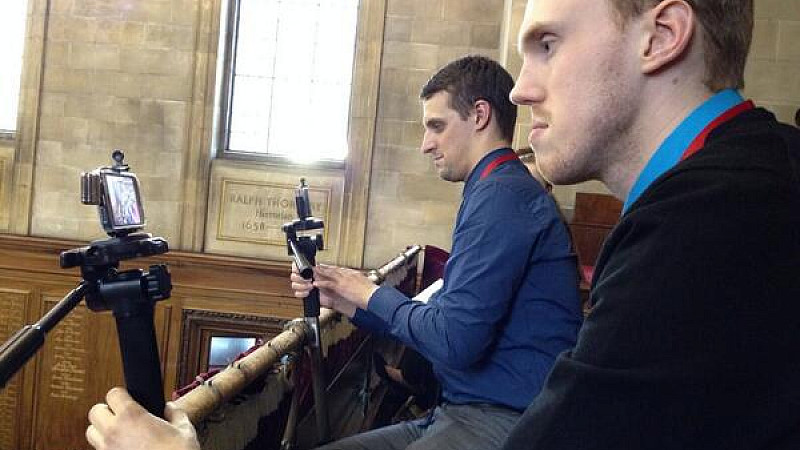 Broadcast journalism students from across the north are making their own piece of history this week.

In Leeds, students took advantage of the new protocol which has been granted by city councillors to produce their first video from inside a council meeting today.

The Leeds Trinity students were finally able to carry out the filming after a lengthy campaign in the city supported by the three journalism schools and local independent website Leeds Citizen.

Journalism lecturer Richard Horsman said he’d been delighted to see how straightforward the process has been today.

“My trainees have been warmly welcomed by the Lord Mayor, and several Members have tweeted their support. The first video from Council is already in the public domain and I'm sure this will become a standard feature of meetings in future.

"I'm delighted we were able to address initial misgivings from Members and come up with a protocol acceptable to everyone concerned. And I'm especially proud my Leeds Trinity trainees were the first to make use of the new protocol.”

Meanwhile students in Salford are preparing to team up with others from around the world tomorrow to produce 12 hours of continuous news. The University of Salford, which also produces our weekly Prolific North News slot in association with Quays TV, will involve students working collaboratively on a rolling news programme, with the broadcast moving from country to country as each host university transmits for up to two hours at a time for what they are billing as a Global News Relay.

The ground-breaking project is co-ordinated by Sarah Jones, a journalism lecturer based at the University’s MediaCityUK campus, along with representatives at nine universities in the USA, Norway, Dubai, India, Malaysia, Indonesia and Australia.

Sarah said: “The aim of the project is to engage students with the concept of global news and bring them together to work on a single journalistic assignment.

“It will develop innovative methods of broadcasting internationally and encourage the students to reflect on news around the world, as well as getting an insight into the variations in culture and news techniques.”

Topics covered during the broadcasting marathon will include social media, fashion and gay marriage.

The 12-hour Global News Relay will begin at 9.00am with the Salford team taking the first slot. The transmission with be broadcast online at www.quaysnews.net.