Prolific North Awards 2015: Pictures, Tweets and a Review of the Night 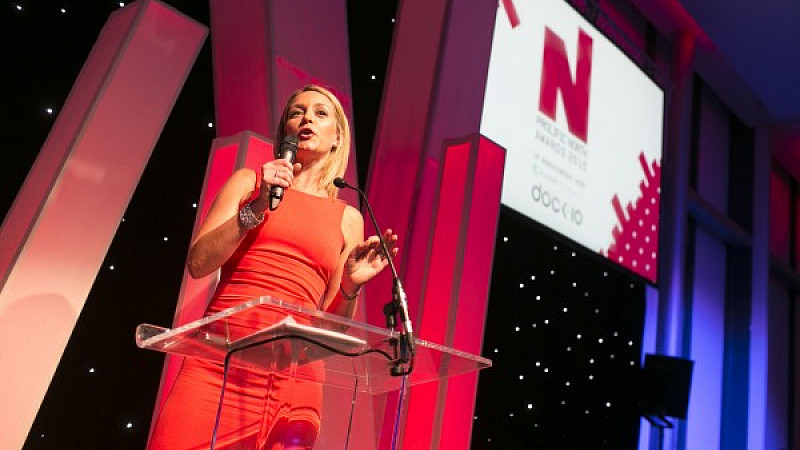 A record number came together for the largest media and creative gathering outside London last night as the Prolific North Awards celebrated the best of the region in style.

Over 750 people filled The Point at Lancashire County Cricket Club as a total of 24 categories brought home just what talent, creativity and innovation now characterises the sector in the North. Last night at The Point

Agencies, companies, individuals and organisations from across the region were represented, from the Lake District and Yorkshire to Liverpool and Manchester, with a splash of celebrity thrown in for good measure.

A huge thanks must go to our headline sponsors Click Consult and Dock 10, as well as our category sponsors CDi Yorkshire, Lucas Fettes, Digital Innovation at MMU, Creative England, Orchard Digital, Creative and Marketing Recruitment, Beever and Struthers, Mustard Research, Barclays Bank, Pitch Consultants and Network Marketing. Thanks also to Pitch Consultants for sponsoring the Twitter wall and to Better Placed for the photo booth.

Hosts Andy Crane and Beccy Meehan established themselves as a delightful double act, keeping a typically passionate and pleasantly boisterous crowd at bay throughout proceedings, while ITV Yorkshire presenter Christine Talbot provided an entertaining cameo with some insightful interviewing of some of the night's guests.

There was also time for a much more solemn duty - remembering Katy Jones, the BBC producer who had so tragically died a few days ago, and Nine Lives Media chief executive Cat Lewis gave a poignant tribute.

The first award of the evening was for Best Newcomer and it was won by LRPR, with owner Lee Robson saluted by the judges for his "impressive track record" and clients including the BBC, The Sharp Project and MediaCom. Accepting his prize, Robson remarked that "after a decade of working in London what a pleasure it has been to work in the North".

B2B Marketing/integrated communications campaign was next, with Skout PR's collaboration with Wax Digital for The Buying Game labelled a "very well thought-out campaign which tipped the balance in a very tight category". Beccy Meehan, one of the night's hosts

BJL's work with the Yorkshire and Humber Adoption Consortium triumphed in the next category, for B2C Marketing/integrated communications campaign, with the judges praising a "genuinely innovative campaign" and an "extremely well-written entry".

Up next was the award for App, which went to Mosquito Digital - the first of two awards on the night for the Manchester agency - with the judges commenting that its Murphy’s Grammar In Use App for Cambridge University Press was a "truly global app" that had testimonials from people "all over the world".

Google Industry head Andrew Barke presented the next prize, for Content team, to Ahoy, with the judges pointing to its "amazingly powerful writing". Receiving the award, Ahoy managing director Mark Stringer said it had been "an entry from the heart" before - in one of a number of worthy speeches throughout the night - giving a shoutout to "all the individuals out there". Animation/graphics company of the year went to MediaCityUK-based Carbon Digital, with judge Rob McLoughlin reflecting on a "very worthy winner" that was a "great one for the future".

The magazine category was so hotly contested that in the end the judges created a new category just to accommodate the quality on offer. So Aukids, aimed at parents of children with autism, picked up the newly created Specialist Magazine award and prompted one of the most fulsome rounds of applause of the night with a touching acceptance speech comparing autistic children with orchids. Judges hailed its "innovative, colourful" style - and its sense of humour.

For the second time in three years, Magazine of the year went to Lancashire Life. With editor Roger Borrell unable to make the night, Cheshire Life editor Louise Taylor received the award on his behalf. The judges said the category had been "extremely tough to judge" but that they had been able to demonstrate "marvellous reproduction quality". Game of the year saw a return to the stage for Mosquito Digital, whose Hidden World of Bacteria game for Zoflora impressed the judges on account of its "highly cost-effective and innovative approach".

Into the news categories, and Blakeway North - who had been nominated in the category for three different programmes - won the news & factual award for its EDL Girls – Don’t Call Me Racist documentary for BBC Three. The judges hailed the way the indie had dealt with a "challenging subject" and brought it to a "whole new audience in a very creative way".

In what definitely became the most retweeted award of the night, Lime Pictures' Hollyoaks picked up the entertainment & drama prize with stars Nikki Sanderson and Kieron Richardson taking the stage to collect the 'Big N' alongside some of the production team. Judges pointed to the way audience figures for the Channel 4 soap have "gone through the roof" with some "really challenging storylines".

BBC Learning took home the next award, its iWonder website claiming the Website category. Summing up the judges' views, former BBC North West political editor Jim Hancock said it was a "great use of BBC resources" and "a worthy winner".

Key 103 won the Radio category, seeing off national competition from Radio 5 live, with the judges highlighting its growing audience and the way "Manchester still runs through it".

Editor Hayley Smith was on hand to collect the News publication prize for the Warrington Guardian, praising her "really dedicated team" and how "great it was to get some recognition". Judge Mark Dickinson said the title's "passion" and "enthusiasm" had shone through to give it the edge in the category. Channel 4 picking up its prize for Media Sales

ITV Yorkshire presenter Christine Talbot presented the next award, for Small PR Agency, to Manc Frank. In a touching speech, general manager Graeme Anthony had pointed to the fact there were only six in the agency that that "we work hard and try our best every day... it's nice to be recognised". Judges praised the agency's "outstanding creativity, zest, passion and flair".

Citypress walked off with the Large PR Agency award for the third year running, something the winners described as "absolutely amazing". Speaking on behalf of the judges, Herb Kim highlighted its "great reputation with the clients... which is perhaps the most important thing".

Channel 4 claimed the Media Sales award, with judges describing its sales performance as "outstanding", while in the Video category, Refinery's Centre of Everything video for the Manchester Arndale pipped the likes of TBWA\Manchester and Glued Films to the prize. Judges said it had been "perfectly targeted" and had generated "amazing results".

In the SEO/PPC category, Leeds' Search Laboratory claimed its first of a double on the night, while MediaCom's "fantastic results" saw it triumph in the Media Agency category. The 750 people inside The Point

Blakeway North returned to the stage to pick up the Independent production company prize, dedicating their award to Katy Jones, a "wonderful woman who had made such a difference".

Also returning for a second award was Refinery, who won the Integrated Agency category in a category that the judges said was "hotly contested" but had been decided in their favour on account of its "impressive client retention".

In the penultimate category of the night, Return on Digital won the Small Digital Agency prize, with founder Guy Levine hailing the "risk takers and the people who have had sleepless nights" in his acceptance speech. Judges highlighted its "emphasis on staff development" and said its entry was "all about making digital work for their clients".

Finally, Search Laboratory returned to the winners' enclosure to pick up the Large Digital Agency award - "flipping heck, we weren't expecting this", was their instinctive response - with the judges pointing to their "great entry and great year".

Some more pictures from the night: And here are some of the many tweets from the night:

Great night at the #PNA15 awards,congrats to all the winners from a very subdued @NetworkNatter Manchester Office! #ouch #baconbuttyrun — David Walsh (@DJwalsh16) May 1, 2015

We’ve had a great evening at #PNA15, thanks to @ProlificNorth & @EmiratesOT for hosting a great event! — Beever and Struthers (@BeeverStruthers) April 30, 2015

Enjoy the rest of the evening everyone #PNA15 was great,as were my parting words with Ed&Ben 'have a lie in tomorrow' pic.twitter.com/3NKYyJIQS8 — Rebecca Fryer (@beckyfryerx) April 30, 2015

Kudos for all those that organised, achieved and supported. #PNAawards #PNA15 pic.twitter.com/YRneDBF2XI — Michael Hall (@MikeHallAC) April 30, 2015

#PNA15 a very obvious tribute to the rude health of the industry and massive achievement by @ProlificNorth. Nick should be very proud.

A huge thanks once again to everybody who came last night or contributed in some way - our next events are the Educate North Awards and Conference on June 3 and the Northern Marketing Awards on October 21.