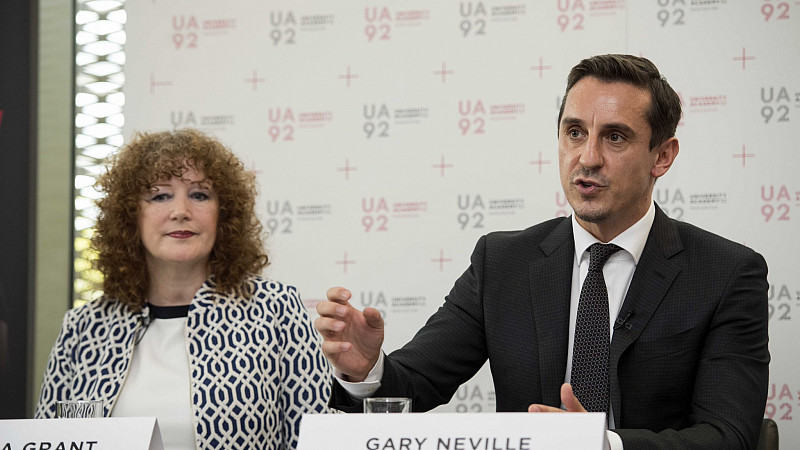 Gary Neville and his fellow Class of ’92 are to launch a new University in Stretford specialising in sport, media and business.

University Academy 92 is the brainchild of Neville, his brother Phil, Ryan Giggs, Nicky Butt and Paul Scholes and is due to open in September 2019.

The University, which is to be built on the old Kellogg’s site on Talbot Road, will be a branch of Lancaster University. It is a joint venture between a new company set up by Neville, Trafford Council, developers Bruntwood, Trafford College and Microsoft and is described as a ‘new higher education concept’.

Internships at Microsoft and other firms will be offered as part of the courses.

At a press conference this morning, Neville said: “Our aim is that UA92 graduates would leave with an academic qualification, of course, but also with a range of other skills such as how to deal with pressure, understand finance, leadership and presentational skills, and also how to maintain a healthy body and mind.

“In other words, the complete package you need to succeed in the workplace.”

With Kellogg's moving to MediaCity next year, Trafford Council borrowed about £12m to buy the firm's former headquarters and will be landlords for the new campus.

Sir Alex Ferguson, who cmanaged the class of '92, said: “I want to wish Gary, Nicky, Ryan, Paul and Phil good luck as they embark on a commendable project that demonstrates their commitment to giving something back to the community that played such a formative role in their lives."