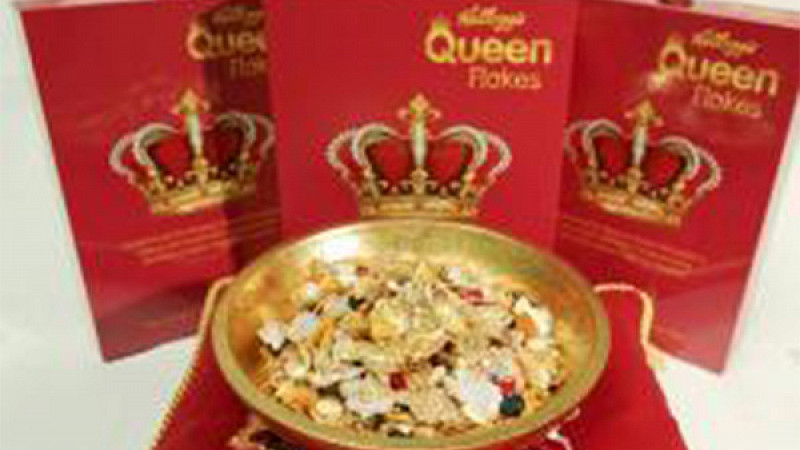 Manchester’s Black Milk Cereal Cafe will host the launch of, what Kellogg’s describes as, the world’s poshest cereal.

“Queen Flakes” is made up of Her Majesty’s favourites, Special K and Corn Flakes. These are, of course, decorated in gold leaf. For an extra dash of indulgence, it also contains edible diamonds, pearls and “her preferred macadamia nuts.”

According to the Trafford-based marketing department of Kellogg’s, they recommend serving with “the finest available milk or even stirring in a little of the Queen’s favourite tipples – Dubonnet and Gin.”

“We wanted to congratulate the Queen on her spectacular reign by creating a cereal in her honour,” said a Kellogg’s spokesperson.

“Despite tough competition from names such as ‘Monarch Munch’ and ‘Liz’s Loops’, we felt ‘Queen Flakes’ said it best. Kellogg’s has held a Royal Warrant as a purveyor of cereals for decades, and is an official supplier to the Palace.”

In spite of Kellogg’s best efforts, apparently the Queen has rather simpler cereal tastes and prefers to eat them from a plastic tub.

Princess Elizabeth became Queen on 6 February 1952, and on 9 September, she surpasses Queen Victoria as the longest-reigning monarch in British history, having ruled for more than 63 years.