Thursday 19 March will see our second annual gathering of the North’s leading PR practitioners as they come together to celebrate excellence among their peers at a one-off event to mark the second publication of our annual ranking of the North's Top 50 PR Agencies.

In just two years, the Prolific North ranking has established itself as the definitive compilation of leading PR agencies in the North. The ranking is published in association with theEword.

We are delighted that our two guest speakers at the event are Laurna Woods, group managing director of Beattie Communications, and Andy Bounds, the Northern correspondent of the Financial Times.

The event on 19 March is by invitation only and Holly Yates of theEword is currently issuing invites to all those agencies listed in the ranking over the course of this week.

The informal celebratory event at Barclays' dedicated tech hub, the Escalator, on Deansgate in Manchester, starts at 4pm and closes at 6pm. Drinks and refreshments will be served. The event is intended primarily at practitioners from the comms and PR sectors but there may be limited space available for folk from other sectors with an interest in comms. If you are interested in attending, please email Holly Yates at theEword at Holly.Yates@theeword.co.uk.

Attendees at the event will be able to take some time out of their busy schedules to mix with fellow leading practitioners, chew the fat, share insights and hear informative presentations from our two first class speakers. Laurna Woods is group managing director of Beattie Communications. The agency is privately-owned and recorded a turnover of £7m for its last reported year. The agency employs around 100 staff and is one of the UK's largest independently-owned PR agencies. Beattie's HQ is in London and it has regional offices in Leeds and Manchester and an office in New York.

Laurna joined Beattie as an account executive in 1997 and has worked her way up through the agency in various roles before being appointed group MD in June 2007. Laurna will be exploring issues around the growth of the agency and sharing her experiences of her own personal development within the agency.

Our second speaker is Andy Bounds, the Financial Times' Northern correspondent based in Manchester. He took up his present role in July 2008 and in July 2011 his portfolio was further expanded when he was appointed the paper's Enterprise editor. He joined the FT in 2004 having previously worked at Kent Messenger Group. Andy will be discussing engagement with the Financial Times and its editorial interests in the North and beyond.

Our colleagues from Mustard Research, who undertook the research for the feature, will also be represented as will representatives of Barclays and our sponsor theEword.

Further information about the event can be had by emailing Holly Yates at Holly.Yates@theeword.co.uk

END_OF_DOCUMENT_TOKEN_TO_BE_REPLACED 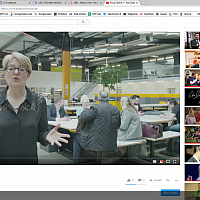