How THAT Tour de France image was made 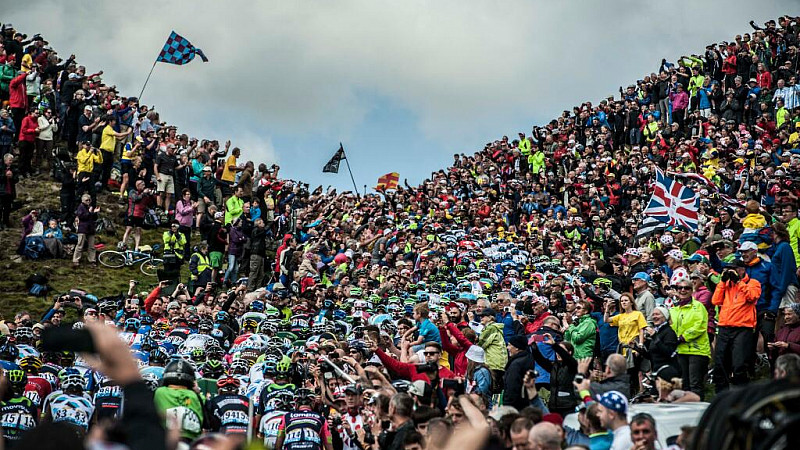 Was this your lasting memory of the Yorkshire leg of the Tour de France Grand Depart?

This remarkable image of the pro teams negotiating a sea of fans on Buttertubs Pass in North Yorkshire on stage 1 became a viral Internet success after a series of professional cyclists retweeted it on Saturday night.

It was taken by James Maloney, a staff photographer for the Liverpool Echo, who along with award winning advertising photographer Dan Kenyon, founded the digital cycle magazine Spin Cycle in 2012.

Both club riders (Liverpool Century CC and Manchester Wheelers respectively) they work together to write about and photograph the sort of local race stories normally missed by the rest of the cycle press and told us more about the picture.

“Since being tweeted on Saturday evening the image has gone viral, being RT by pro riders like Cancellara, Contador and Bernie Eisel from Team Sky.

“Bernie DM'd me asking permission to use it on his FaceBook homepage in exchange for a signed Team Sky jersey - which was nice of him!” said Maloney.

“Buttertubs was always our target for the TDF as we know the passion of locals and club riders for the area. We also planned to cover the hill between us and we've got some lovely images of the day and the few minutes the Tour came through. The images will be in the next digital issue online in August.” Update: After the image published here this morning prompted such a lot of interest, Maloney has given us this detailed account of the day.

"Dan and I had planned to photograph the Tour de France heading over Buttertubs pretty much the minute the route was announced. After all, it would be daft for us not to at least watch the world's toughest stage race when it was right on our doorstep in beautiful Yorkshire.

"We parked up in Sedburgh and rode up to the foot of Buttertubs on our bikes, lugging our heavy photographic equipment with us in rucksacks, which wasn't easy.
Along the way, we passed throngs of cheery local cyclists, all smiling and happy at the fact the race was literally hours away. We were smiling, too. After all, this was what it was all about. This was the Tour de France.

"Arriving at the foot of Buttertubs, we were greeted with an ever increasing sea of high-vis and lycra – and it was only 8.30am. Blimey.There were people dressed up in all kinds of costumes – fake French people, sheep, shepherds and chickens. There was even a guy dressed as a banana running up and down the hill, but I am not too sure what all that was about.
Walking up the climb to the first cattle grid, where the road is guarded each side by two hills, I pretty much knew that this would be the perfect spot to grab my shots of the Tour.

"At this point, I wasn't sure whether to shoot down from the hilltop on the right. It would have enabled me to get spectators on both sides of the hill in the frame, with the riders cutting through the centre.

"Sadly, this vantage point created one major problem – if any of the crowd stood up then my shot would be ruined and I'd have no chance of getting off the hill and down to the side of the road in time.

"My other choice was to position myself a bit more down the hill, looking up to the summit. This would mean that I'd get both hillsides in and hopefully no-one jumping in front of my camera.

"After walking up and down to try and work out the best spot, I decided to position myself next to some of the cycling lads I know from Palefish based in Wirral. It was a decent spot, had all the right angles and I'd also be able to grab something on the wide lens as the riders came past, then jump up on a nearby stone wall to get a shot of the riders snaking their way up through the amphitheatre that would soon be Buttertubs.

"Now all I had to do was wait, but the hours ticked by being surrounded by such a fun crowd. They were brilliant. When a young kid would try to ride up the steepest section of the hill, the crowd went into a frenzy cheering them on as if they were the pro riders. We even all did a Mexican wave.

"Soon, you could hear the buzzing of the helicopters and everyone started to get excited. The pros are coming; the pros are coming.Trek Factory Racing's Jens Voigt soon appeared battling his way up Buttertubs and I managed to grab some nice shots of him before the main peloton appeared behind. I had it all planned, so I jumped up on the wall and waiting for the riders to start snaking their way through the huge crowds gathered on each hillside.
Within a matter of seconds, it was all over and time to walk back down the hill. On the ride back to my car, I never imagined that I had taken what was soon to be dubbed 'the' photo of the Tour of Yorkshire.

"To be honest, I was so tired when I got home that I only did a bit of basic processing on the image – adjusting the exposure and the likes – before tweeting it out and heading off up to bed. The next morning, my photo had gone viral. I was shocked. I still am. I had no idea anyone would like it – let alone pro riders like Fabian Cancellera, Alberto Contador and Team Sky's 'Mr Cool' Bernie Eisel, who all retweeted it.

"Honestly, though, I can only take part of the credit. It it wasn't for the beautiful surroundings of the Yorkshire Dales and the millions of spectators lining the route, it would have just been a photo of some cyclists riding up a steep hill. All the euphoria and passion encapsulated in this one frame is down to them. They made it the grandest of Grand Departs."

Spin Cycle also has a limited edition annual of the best of 2013.