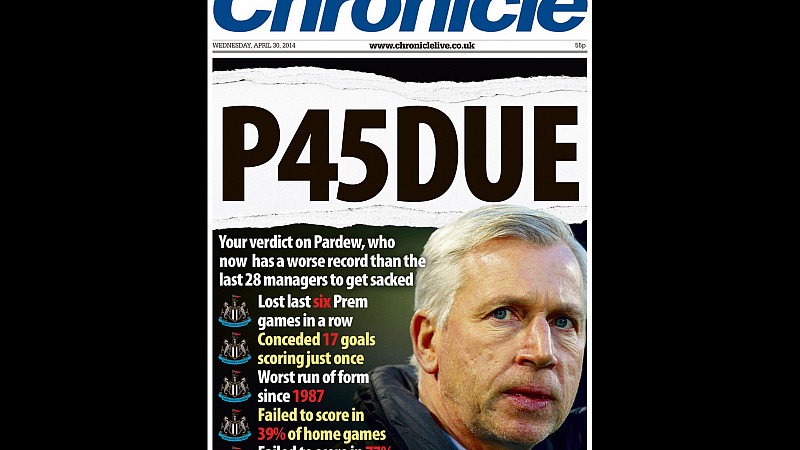 The ongoing animosity between the local paper readers and Newcastle United football club has resulted in this dramatic front page being crowdsourced online.

The Newcastle Chronicle asked readers to choose a headline for this morning’s front-page, with this one being the final choice decided by a vote on Twitter.

A spokesperson for publisher Trinity Mirror said that The Chronicle posted a picture of today’s front page, lambasting Newcastle manager Alan Pardew in the wake of the team’s sixth defeat on the bounce, late last night.

With just a headline waiting to be inserted, the paper put a call-out on Twitter asking readers to send in their best efforts.

They say suggestions flooded in, the pick of which were listed in a story on the Chronicle’s website.

The best two suggestions were put up for a vote – ‘P45DUE’ and ‘Only six more years of this…’ Readers then retweeted for a yes and ‘favourited’ for a no vote.

More than 300 voted for either of the two possible front-pages in just a couple of hours. The overwhelming winner was the ‘P45DUE’.

Previously, sister newspaper The Sunday Sun also published a sarcastic ‘apology’ on its back page after the manager criticised what he saw as a lack of support from the local media.