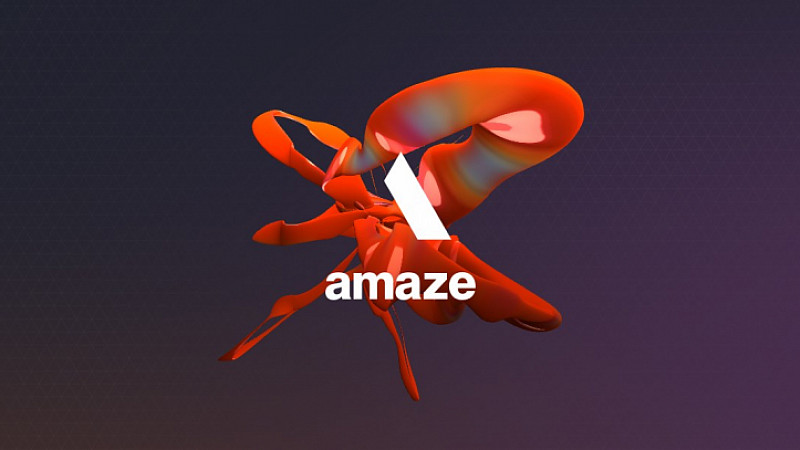 Amaze has unveiled what it says is the first of a kind, with a “living” logo to accompany its new website.

The image uses a brand new technical framework, which visualises data, created by the firm’s “digital and human activities.”

A number of watching and listening devices at the firm’s Manchester, London and Chicago offices, track employees’ movements in the physical environment and then interface these with their digital interactions. The resulting data is translated into the 3D form - a “living” logo, which represents what’s going on at the agency.

“This is a brand mark born of technology and fed by human behaviour, which mirrors Amaze’s key purpose. We wanted to embody both the strength and rigour of Amaze, which can be seen in the solid white triangular forms of the mark, as well as its creativity and magic, which are demonstrated in the fluid, ‘living’ aspect of the brand mark,” explained Paul Musgrave, creative director at Amaze.

“It is the first of its kind to respond to live data generated by an aggregation of human and digital sources. Its responsive nature means it is constantly changing to reflect the nature of the business. We also wanted the brand mark to have a place off-line, so every presentation and document from Amaze will capture a unique manifestation of the brand mark and every Amaze business card also carries an individual piece of digital artwork, displaying a one-off version of the mark.”

It uses various web technologies, including WebGL so that more than 10,000 polygons can animate smoothly - even on smart phones; while Web-Worker reduces processor demands, despite communicating large amounts of data in real time.

“Our new logo is a tangible representation of everything our business stands for. We are fascinated by the combination of technology and human behaviour, and are deeply passionate about creativity borne out of multi-disciplinary people and teams. The new brand mark embodies both of these values,” added Natalie Gross, CEO at Amaze.

“The brand mark also starts to challenge the conventions of a logo being essentially a static piece of artwork or a singular representation of an organisation. Given all of the opportunities for interaction and clever-play afforded to us by digital technologies, we can begin to look at our corporate identities in different ways to make them more effective embodiments of our brand in its fullest sense – telling a story about culture, attitude to innovation and supporting the creation of an emotional connection with our key audiences."

We’ll leave Amaze to explain exactly how the movements are animated:

“The three-dimensional form the logo takes is essentially a simulation of a ribbon orbiting the centre. As it moves, different sources of data influence its trajectory – resulting in the visible ‘arms’ that grow and extend.

“For example, as the particle reaches an area of space influenced by social activity, a heightened flurry of posts on different networks will result in a larger, more frantic animation at that pole.”

The logo has 2 modes - watching and listening. The former responds to those observing it, while the latter adapts according to the sounds it “hears.”