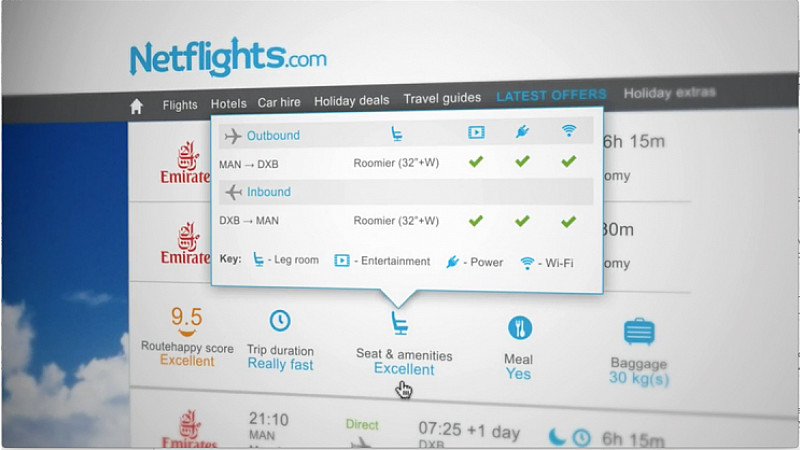 Netflights.com has commissioned its first television advertising campaign for 7 years, though Cheetham Bell.

The Preston based firm will initially target ITV’s Granada, Yorkshire and Central regions with the promotion.

“Travel is a very competitive sector, so any TV creative needs to have cut-through.  We’re confident that Cheetham Bell has come up with a concept, using our existing brand assets, to meet our two objectives; delivering immediate activation, alongside longer term improvements to consideration and awareness,” said Robin Parry, marketing, product and commercial director of Netflights.com.

The campaign promotes the firm’s offering as well as its new “flight facts” function, where customers can find their “perfect flight” by comparing comfort, trip duration and on-board amenities - alongside price.

It was made by The Other Side Creative and directed by Russell Appleford - best known for the Channel 4 idents.

“Netflights.com is the perfect one-stop solution for long-haul travel. Our job is to produce creative that really cuts through, and that extols Netflights.com’s  easy-to-use website and expertise within its sales centre, and makes Netflights.com synonymous with this sector,” added Steve McCarron, MD of Cheetham Bell.

Media is by Carat Manchester.