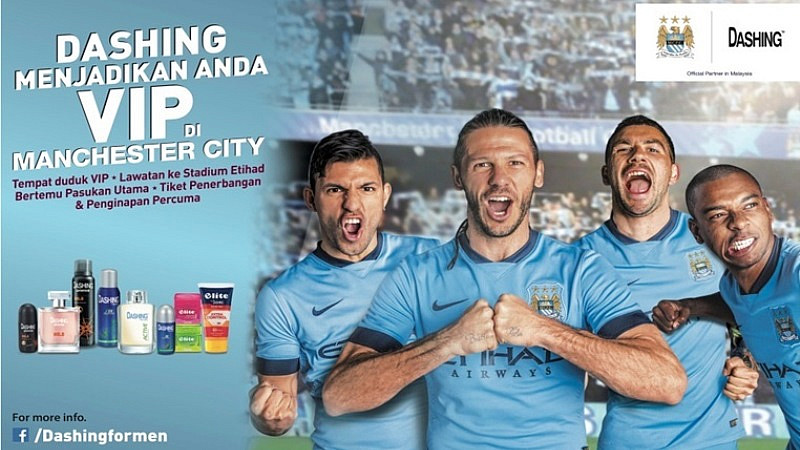 Manchester City has this morning announced a licensing deal which will see a Malaysian toiletries brand using the famous crest and player images for national TV marketing and social media campaigns.

As part of the two year deal, Dashing will become what City call its Official Personal Male Care Partner in Malaysia.

Under the terms of the partnership with male grooming suppliers Dashing, its customers will also be in with the chance to win a series of all-expense paid trips to Manchester to watch Manuel Pellegrini’s men in action, live at the Etihad Stadium.

Winners will also be able to get up-close-and-personal with City stars such as Sergio Aguero, Vincent Kompany, Martin Demichelis and David Silva at an exclusive blue carpet experience.

Chief business officer for Manchester City, Tom Glick, said in a statement on the club website:

“Dashing is a major player in the Malaysian skin and body care market, which has gone on to become one of the nation’s leading brands. Having built up a long and trusted reputation among the millions of young men in the region who also love football, Dashing is the perfect fit for Manchester City.

“When the Club visited Kuala Lumpur during a previous pre-season tour, we were blown away by the passion and commitment of our Malaysian’s fans. We look forward to working with the Dashing team and to welcoming our loyal Malaysian fans to the Etihad Stadium throughout the season.”

Marketing Manager for Dashing, Rishi Pahwa, said: “We realize the love and passion for football and especially English Premier League and are proud to present DASHINGgoesMancity contest.”