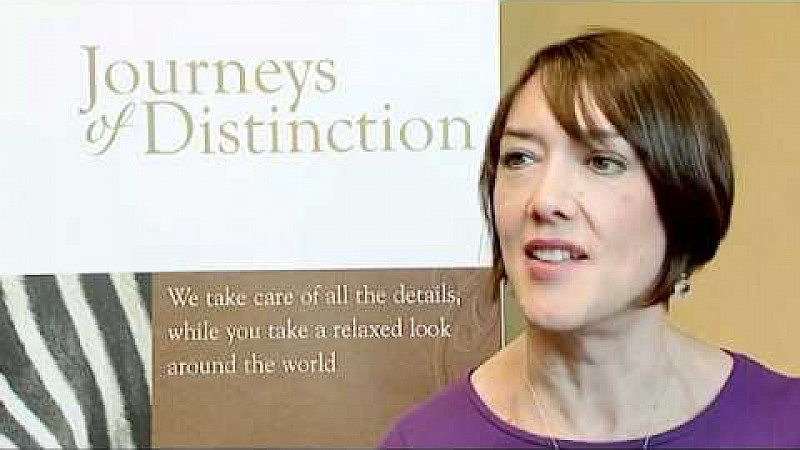 "I think that what I’ve really learnt is that if you love what you do you'll be successful. When I've struggled it's usually where I've had the least affinity with the role."

Karen Gee was born in Blackburn, raised in Shropshire and has worked across the UK and on the continent for private, public and private equity backed companies. She is now the managing director of the Kuoni-owned travel subsidiary Journeys of Distinction, based in Cheshire.

At school, there was pressure on her to read medicine or the Classics but Gee was more interested in marketing and opted for an international marketing degree at Thames Poly, one of only two places at the time which offered this 'new discipline' called marketing.

The four-year sandwich course included a spell in Paris where Gee had her first introduction into the world of commercial marketing working in the publicity department of Midem, which stages trade shows, events and publications  across Europe. Post college, with the input of a family friend, Gee got a job with Laura Ashley as a graduate trainee and had the opportunity to work with Nick Ashley on a perfume launch. "I loved it. One of my greatest and most enduring loves is still putting together brochures; writing, editing and overseeing photography and at Laura Ashley we had lots of really high quality brochures and it was great fun and great experience."

As a child Gee travelled a lot and on her travels, her father and the young daughter often had 'speak French only' days- "much to the annoyance of my mother!"

Travel was in the blood and in the late 80s she joined Airtours in Helmshore in Lancashire where she remembers chasing sheep out of the car park at the interview.

Gee started as a marketing assistant and steadily rose to become marketing manager.

The Airtours offer was not everyone's cup of tea but it was good value for families. However, along with the successes came a growing number of negative issues associated with the company, complaints and an increasing number of reputational issues, with the Flying Pig episode (the name one of the tabloids christened a long-haul flight) particularly memorable.

This was also the start of more populist TV travel shows and Airtours became easy meat to have a go at, the holiday programmes and the Watchdogs and others. "But for David Crossland (Airtours' founder), he never saw it as a problem and always turned it into an opportunity. It was actually uplifting the way he dealt with negativity."

Gee stayed there for "five enjoyable years" but towards the end a new marketing director, Richard Carrick, joined and he made the marketing role a much bigger influence within the company but his arrival meant there was nowhere for Gee to go.

So when an opportunity arose with Sky TV to develop her travel industry experience, she leapt at the chance.  The job was essentially to negotiate deals with travel agents and the new TV channel that had been launched - Sky Travel. The approach had come from Sky.

"Sky told me that I'd come to their attention because I had always been in the press and on TV defending Airtours and they felt I was ideal to be the general manager of the new Sky Travel service."

One of the first things Gee had to do was find a call centre partner and they chose Thomas Cook Direct in Peterborough which at the time was white-labelling services for companies.  "It was great fun and we were able to deliver numerous offers at unbelievable prices because of the volume that we could deliver over the Sky platform. Indeed, Thomas Cook actually started to struggle with the volume of work we were putting through and sales were quickly well ahead of budget."

"At Airtours there had been lots of crap but we did actually care and we did try to improve our operation but I gradually discovered the Sky culture wasn't the culture for me and for me being in the right place is very important."

She stayed a year before taking up an offer to join a new travel company called Flying Colours to be the company’s development director. Flying Colours had two key brands at the time - Sunset, which was cheap and cheerful - and Club 18-30, which became notorious, aided in no small part by those infamous poster adverts, Beaver Espana et al.

Unfortunately it didn't last long because Thomas Cook bought Flying Colours and the brand was lost. Her boss was "unceremoniously dumped" and Gee was made redundant shortly afterwards. "I felt absolutely terrible and was shocked. It is a common part of the travel industry but it was the first time it had happened to me. It gave me a perspective on how to handle things. There are many ways in which the process should have been a lot more transparent and fair, but it felt like I had had my hands on the till and it was all just so unjustified. It was awful."

But she needed to work and accepted a new job as a sales and marketing director with SNCF and a subsidiary of theirs called Rail Europe based in London. She stayed there two years but she never really took to the job, just at the time when the dot.com era was beginning...

Winging it as an early net guru

Gee was approached by edreams.com, based in Barcelona, with lots of backing from blue-chip VCs including APAX and Atlas. It started in Spain and was being rolled out to the UK, France, Italy and other European countries. It was an intermediary-led programme anchored about a format which included online travel support and an information desk - this was pre-Google: the product was called the Dream Guide. Because Gee quickly gained some online experience,she became a sought-after person as a speaker at international conferences. "In my defence I wouldn't pretend that I was an expert, but I could explain how it worked and in plain English. I even had a weekly column in Travel Weekly, called The Net Result."

But the business model really wasn't working and the burn rate was huge. Some markets were OK, Italy, for example and to a lesser degree in Spain itself, but the UK just wasn't happening. So Gee joined First Choice to set up a new cruise operation based in Manchester. It was a JV between First Choice and Royal Caribbean. They wanted a new product and a new market, rather than just cannibalising their existing customer base. The new product targeted people in their 30s and 40s who wouldn't normally dream of taking a cruising holiday. "It was a fascinating, exciting and intellectual challenge."

They came up with the concept Island Cruises and brought on four leading brands to help enhance the offer: Oddbins, Holmes Place, Costa and Jamie Oliver. "I pitched and persuaded these companies to join the ride and come along and support it with various offers and brands and incentives and the PR agency we employed in London was sensational for us. It's fair to say I had very shiny shoes at the time..."

Unfortunately there was then a falling out between the boss (John Drysdale) and the owners and a new guy was brought in with his own team and Gee was made redundant again, just six months after relocating to Manchester.

"I'd just bought an amazing new apartment and it was a low point in my life" but then an opportunity arose to join Wallace Arnold the coach company and "I needed a job." Gee candidly admits though that although it was great fun at the company and she was treated extremely professionally, she never really developed an affinity for the products:  cheap coach holidays.

Gee joined them as a sales and marketing director based over in Leeds. It also provided a new experience as there were about 20 Wallace Arnold shops selling own brand products and third-party bookings and Gee was given responsibility for the shops and in due course the retail division was turned round from a loss maker to one that was profitable and essentially "a downtrodden division came good."

3i then invested in the company and subsequently Shearings merged with Barr & Wallace Arnold Trust and the new brand was WA Shearings with its headquarters in Wigan.

A culture of fear

It had though in the process Gee felt, developed a culture of fear. "I don't think the management knew how to get the most out of all the staff."

She was now in charge of over 150 staff spanning sales, marketing, call centre staff and the retail estate. "I wasn't really comfortable, but there was less commuting and it was great for my CV. I stayed there four years until a new CEO was brought in and installed a new team and restructured…and I was made redundant again."

But this exit proved timely as she was quickly approached by Journeys of Distinction. Francis Torrilla, the MD of Kuoni’s special divisions recruited her: they worked together at Airtours.

"I quickly discovered the job was made for me. I adore it.

"The people, the customers, the holidays, everything suits me right down to the ground. It's not to say it's easy, there are always challenges, but I'm at my best here and I know it."

Her experiences of working with agencies in the North recently has been positive. She's worked with Brazen, Magnetic North and Lakestar and a fulfilment company, ProPac, in Huddersfield.

But she's also had her fill of agencies who over-praise and under-deliver.

"If an agency actually thinks about our business beforehand and presents some new thoughts and potential strategies, I am much more likely to listen to them.

I think that I’ve what I’ve really learnt is that if you love what you do you'll be successful. When I've struggled it's usually where I've had the least affinity with the role. I know Journeys of Distinction is not my business but I feel as if it is. And I guess the other key thing I've learnt is that many people today simply don't put in the time and effort they should, either preparing for their job or planning and delivering their work."