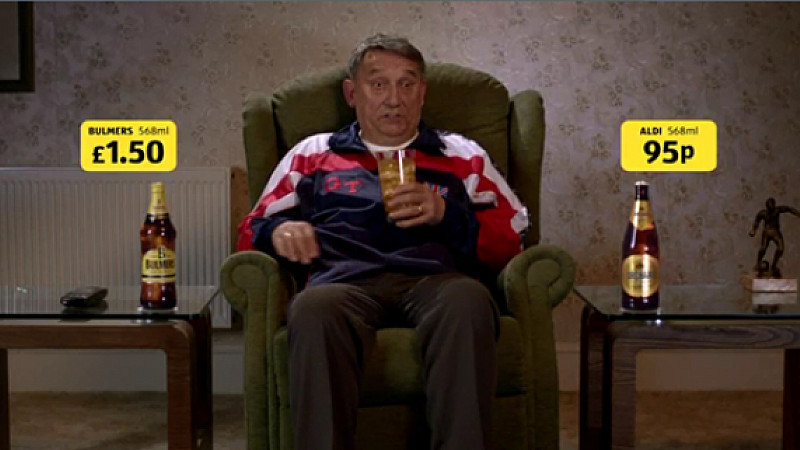 The World Cup hype is well and truly underway now so here’s a round-up of just some of the football themed activity going on across the media and marketing sector in the north today. Please do feel free to share your own below.

The twenty second spot features Graham Taylor in his armchair in front of the TV watching a match while making a comparison between a brand leading cider and Aldi’s own brand equivalent before a “furniture malfunction” results in him uttering the immortal line “Do I not like that”.

The commercial breaks on June 9 and runs across multiple channels including ITV, Channel 4 and Sky.

Readers think Italy will pip England
In the newspaper world, Trinity Mirror titles including the Manchester Evening News and Newcastle Chronicle are using a Google form tool to poll readers on who they think will top the different groups.

A spokesman said thousands of readers have already been choosing who they think will win each group from the drop-down menus. The graphics below reflect the total number of votes for each team - the further right a player goes, the more votes his team has got.

Votes are recorded instantly but the graphics will take a few seconds to update after a vote is recorded.

At the time of writing the tightest Group is D, with Italy pipping England to top spot, and Uruguay marginally behind the top two.

Head of Trinity Mirror’s Data Unit, David Ottewell said: “Linking live polls to animations and graphics is something we want to do much more of in the future so this was something of a test.”

“There may be scope to extend this idea beyond sport and into politics, and even data-based games.”

See that in action, and cast your own votes here. Liverpool creative agency Uniform has launched a creative project around the tournament by inviting creatives from the 32 countries to produce a piece of artwork/ poster for their country, after each of their nation’s game – inspired by the game itself.

So far, the bigger names they have are Joao Peres, Apple for Brazil, Lance Wyman, USA, Sam Byrnes, M&C Saatchi, Australia. But they are looking for more:

“Inspired by the thrilling and unpredictable prospect of the 2014 World Cup in Brazil, we're challenging 32 creatives from the 32 competing countries to create original 90 minute artworks that document their nation's journey through the tournament.” Leeds marketing agency, Banana Kick (which named its company after a previous world cup event) is assigning each of its 32 employees a team in a World Cup draw. Staff will be rewarded as their team succeeds and suffer penalties for team losses or on pitch incidents such as red cards.

“We are a creative business with sport at our heart and we wanted to make the most of the World Cup by helping our team really live the highs and lows of the competition. I’m hoping that I don’t face the ultimate sanction of having to make everyone in the agency a brew.

“Remember Mexico ’70, the World Cup where a perfect storm of creativity, high altitude and tight shorts led the Brazilian team to show the world that you could overcome pretty much any obstacle with skill and great technique? That’s why we named our business Banana Kick.”

* Have you got a World Cup themed event or staff initiative going on? Feel free to share the details via the comments below?