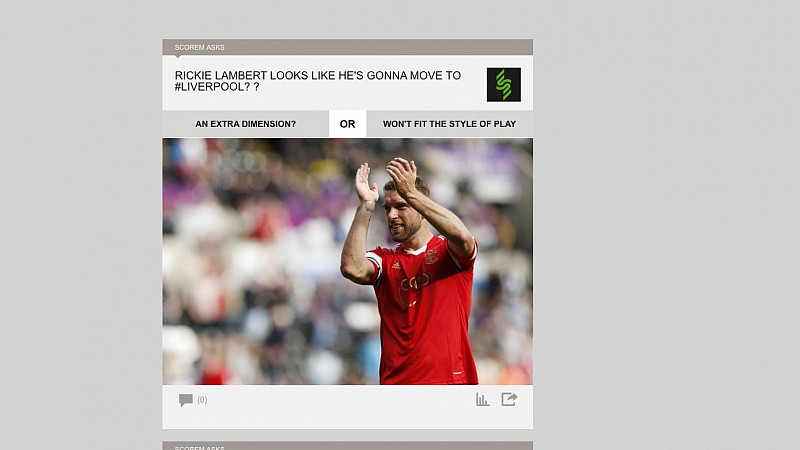 Currently running in beta, the site has been designed to promote debate amongst football fans, with user-generated polls and statistics. The “slow release” has been gaining some traction, leading sports data company, Opta has signed up as a partner and First 10 client, Puma has agreed to sponsor the site for its first year.

One of the original investors was footballer, Joey Barton.

“Despite Facebook and Twitter and all the online supporter groups, you can’t help but feel that the opinions and voices of ordinary football fans are being lost,” he said.

“Over the coming months and years we hope to change that. It’s pretty simple at the minute, but we want Scorem to start a football revolution, to get fans heard - and to change the game we love for the better.”

At the moment it acts as a fan opinion aggregator. Users can generate a poll and fans vote and comment on it. Scorem can also promote debate by using data from Opta. The results can be shared through social media channels and the polls can be embedded by commercial partners.

“When you take the Opta performance data and mix it with the feelings of real fans, you can start to reveal what fans really think about players, managers and matches and you can use that to fuel debate within the football fan community,” added First10 managing director, Dan Bosomworth.

“As opinion either supports or clashes with the stats, you begin seeing things like overrated players, unsung heroes and lucky wins… All these kind of stories begin to come out, and then they get debated themselves.

“In that sense, Scorem is a unique information and opinion-sharing resource, which is useful not only to fans, but to football clubs, brands and media companies as an opportunity to better understand their consumers.”

Goal.com is already trialling embeddable polls, with a number of others sites likely to test it in the build up to the World Cup.