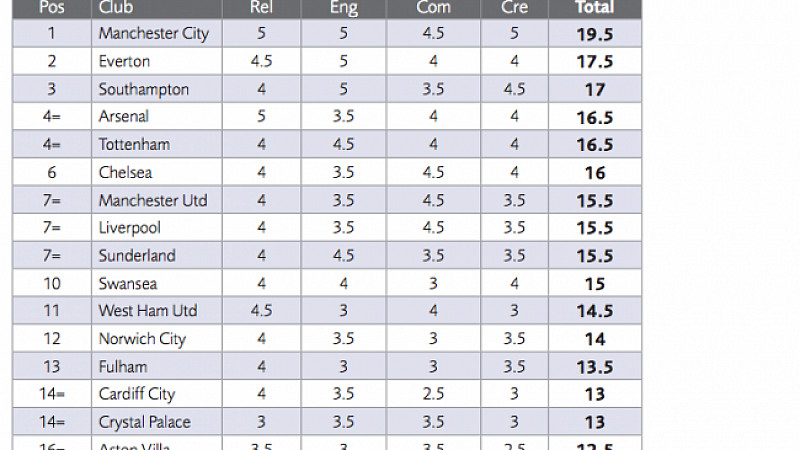 Manchester City is top of the Premier Barclays League when it comes to the effectiveness of their social media strategy while Newcastle United use it to push offers to fans, according to a new piece of research.

City come out as number one in a top 20 league of clubs ranked by marketing research company Accepted Socially which carried out research on how each club used social media.

Each club was assessed on four performance areas – relevance, engagement, commercialisation and creativity, and City scored maximum points in all but one area.

Everton was listed in second place and Southampton in third. Meanwhile Manchester United find themselves in seventh place while Stoke City trailed in at number 20.

“It would be easy to suggest that with its deep pockets, it should be leading the way but while such resources may contribute, City’s considered approach, creative flair, outstanding use of content, and ongoing desire to engage and involve fans through its channels are the drivers behind its success,” said Matthew Carlton, Accepted Socially’s founder and lead analyst on the report. The league table on the Accepted Socially report

The assessment was carried out at the end of January and start of February, a period when all teams played at home and away and the transfer deadline window drew to a close.

The report finds that the majority of the clubs understand social media, are creative with content and are willing to embrace new platforms.

However, the research found that one, Newcastle United, used its social channels in what it describes as ‘an overtly commercial manner’, continually highlighting promotions to fans.

“As we were putting the finishing touches to the report we heard how it had relaunched its Twitter page and was set to use the channel to engage more with fans. It certainly needs to as this platform – and in particular Facebook – seem to simply be sales vehicles to push Mike Ashley’s Sports Direct empire. Newcastle fans deserve better and will look at the way other clubs use social media enviously”, said Carlton.

The full report is available for free, via Accepted Socially’s website here.