Furchester Hotel checks in with dock10 for new series

Dock10 will once again provide studio facilities and post-production services for The Furchester Hotel on CBeebies.

Series three and four are being produced concurrently. There will be 50 11-minute shows and a 22-minute Christmas Special.

Filming began on 16 May in dock10’s HQ2 studio and is scheduled for broadcast on CBeebies later this year.

The Furchester Hotel debuted in 2014 and marked the first time that Sesame Workshop had collaborated with the BBC.

Andy Waters, Head of Studios, said, “The complex sets required to accommodate the puppeteers and their counterparts means that HQ2 suits The Furchester Hotel completely.

“HQ2 boasts a full complement of scenery hoists, as well as being one of the most technically advanced studios in the UK, with connectivity for 12 camera channels, file-based HD workflows system and advanced lighting.

“It’s great to have the residents of The Furchester Hotel back at dock10.”

The studio is also home to Citizen Khan, A Question of Sport, Mastermind and 8 out of 10 Cats Does Countdown.

END_OF_DOCUMENT_TOKEN_TO_BE_REPLACED 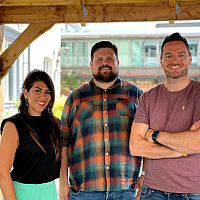