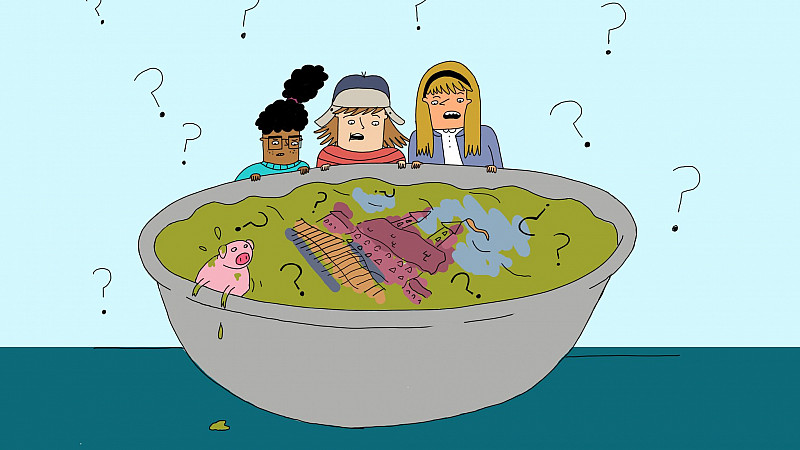 CBBC and BBC Worldwide have shortlisted three projects to be taken forward to the final pitching stage of its first animation pilot scheme, ANIM8.

After receiving close to 300 submissions, Mystery Soup by Hannah Jacobs and Victoria Manifold, Peeled Prawn And Shaved Sheep by Vincent James & Karina Stanford-Smith (Fat City Films) and Poles Apart by Alex Collier will now enter the final stage of the scheme, in which they will receive additional development time to complete scripts, visuals and a bible. An initial longlist was announced in February. A screengrab from Mystery Soup

The projects will be pitched and then assessed by a senior BBC panel including Cheryl Taylor, controller of CBBC and Henrietta Hurford-Jones, director of children’s for BBC Worldwide.

Mystery Soup is a surreal comedy about three plucky 13-year-old girls investigating their weird new boarding school and the bizarre goings-on there. It's created by writer Victoria Manifold, from County Durham, and director Hannah Jacobs.

Peeled Prawn And Shaved Sheep follows the adventures of a genius sheep and his shell-less friend, and is created by Vince James, Karina Stanford-Smith, Simon Godfrey and Kaine Patel.

And Poles Apart is about a haphazard elf who has been banished from Santa's grotto to live in the South Pole with Santa's brother, Sandy Claus. It's created by Alex Collier, a Viz comic cartoonist who has recently written on Mr Bean: The Animated Series, and even more recently, the Danger Mouse Comic.

Once selected, the finalist will work alongside the CBBC and BBC Worldwide creative teams to develop their project through to a pilot.

Cheryl Taylor, controller, CBBC, said: “The ANIM8 team have been struck by the standard and volume of entrants to the programme - proving what a dynamic talent pool we have for the UK animation industry. We're looking forward to the more textured pitches from our three finalists - their concepts show great promise."