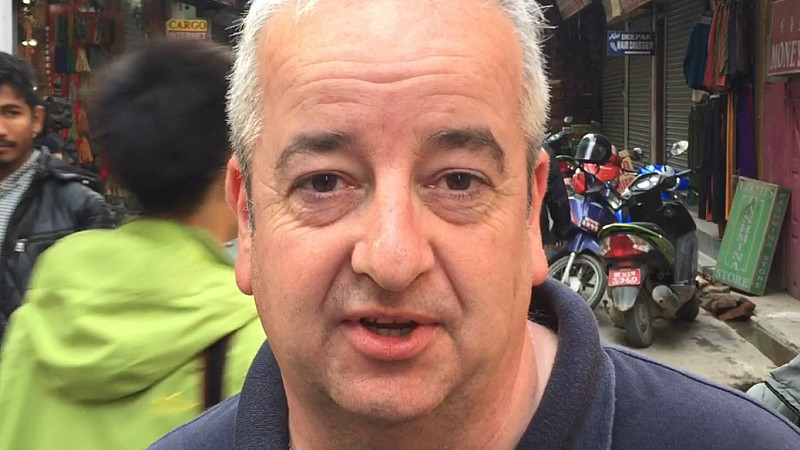 This week it's Nick Garnett, reporter for BBC Radio 5 live. He has just returned from reporting on successive disasters in Malta and Nepal - here he recounts some of his extraordinary experiences.

It started with a slightly concerned look from my wife and a quick press on the SEND button. “Nepal?”.

A couple of minutes later 5 live’s head of news, Stephen Mawhinney, sent a reply: “complicated... but I’m thinking about it”. The washing machine was still cleaning my clothes from the previous week’s trip to Malta where I’d been reporting on the migration disaster in the Mediterranean. Twelve hours later I was at Manchester Airport, clothes not quite dry. I flew out on my own (Economy of course). My hotel room was too dangerous to stay in so a sleeping bag outside was home for the night. A single-person send on a disaster the scale of the Nepal Earthquake IS complicated. Reporter, producer, technical operator - just one person - but I managed around 50 live hits on BBC 5 live, Radio 4, Breakfast TV, World Service Radio and TV in four days.

It’s a question of compromises - at times the most important thing is getting the satellite working, at other times it’s editing the audio on my smartphone and ‘mixing’ the radio package together.

But mostly it’s the journalism that matters - such as when I was perched half way up a disused apartment block alongside search and rescue teams watching as a 15-year-old boy was being rescued, alive, five days after the quake.

The technicals and the production were forgotten and it was a case of ‘saying-what-you-see’ - good old fashioned reporting - on a mobile phone. If the words you use and the pictures you paint are strong enough the fact that it’s on a poor intercontinental mobile phone signal doesn’t matter. The boy survived. End of.

But there weren’t many happy endings and the heart-breaking events couldn’t fail to touch you. You wouldn’t be human if they didn’t. Like the 22-year-old mum we met who’d told her baby to play outside only for the earthquake to bury him under the rubble of her own house.

We were among the first people to make it through to her village in a remote region to the north of Kathmandu and we heard how she had enough rupees to pay for half a tank of fuel for a digger to excavate the ruined house. But £12 worth of fuel doesn’t go very far. It ran out before she could find her baby’s body.

The day after I was there the army arrived by helicopter to take the village’s women and children away to safety... but the men are left with the ghosts of their families and friends and homes around them. I will remember most the friendliness of the people of Nepal - the abandoned shops that hadn’t been looted, the frontless homes where clothes still hung in the wardrobes, the men who I saw walking towards me at midnight as I broadcast in pitch-black, no street light darkness, amid the collapsed apartments of Kathmandu.

I hid my phone, split my money into two pockets and prepared for the worst. Were they here to rob me? One approached. “It’s dark. Do you want to borrow a torch? When you finish, bring it back - we’re sleeping in that car over there.”

Nowhere deserves to be hit by a force of nature like an earthquake which reduces lives and hopes and futures to rubble but a country with so very little to begin with somehow deserves it even less.

I was able to come home at the weekend, filing my final piece for 5 live Breakfast from 35,000 feet above the Earth as I flew over Kuwait City. Technology gets better and better. A couple of days off and then back into it: The aftermath of last night's election awaits and it's time to get the batteries charged for what will probably be another marathon for BBC 5 live!