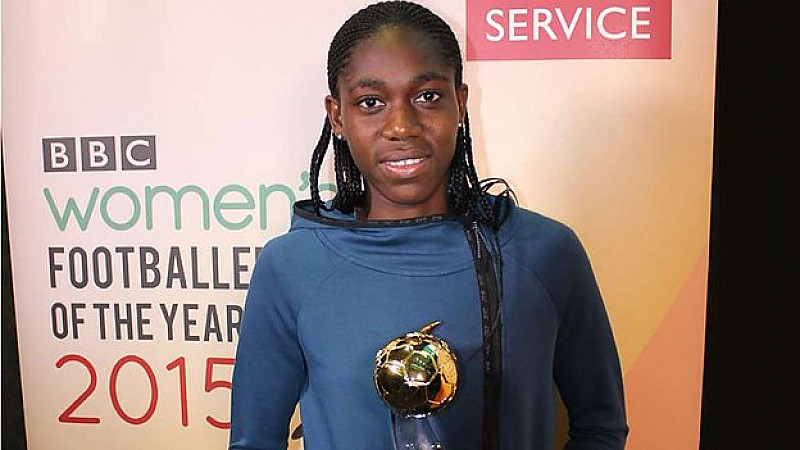 Liverpool footballer Asisat Oshoala has become the first player to win the BBC Women’s Footballer of the Year. The 20-year-old forward, who also plays for Nigeria, was voted for by football fans around the world.

Oshoala said the award had left her feeling ‘happy and appreciated’.

She said: “I would like to say thank you to the BBC, to my fans around the world and to everyone who voted. It's a very good thing for me and also motivation for the World Cup. I had a very good 2014 and had the opportunity of going to the under-20s Women's World Cup with Nigeria and also won the Golden Ball and Golden Boot so I think maybe that added to the reason why people voted for me.”

The winner was revealed on World Have Your Say on the BBC World Service. Oshoala, who is already in Canada ahead of the World Cup, was presented with the award by the BBC’s Caroline Rigby, project lead on BBC Women’s Footballer of the Year, and the programme also included interviews with Edwin Okon, Head coach of the Nigeria senior women national team, and Nigeria Captain Evelyn Nwabuoku.

Oshoala signed for Liverpool Ladies in January 2015, with Manager Matt Beard calling her "one of the world’s top young footballers".

She is the first African to feature in the Women's Super League, and says former Reds striker Luis Suarez is an inspiration because of his ruthlessness in front of goal.

She was voted the winner from a shortlist of some of the top names in women’s football that included Verónica Boquete (Spain and FFC Frankfurt), Nadine Kessler (Germany and VFL Wolfsburg), Kim Little (Scotland and Seattle Reign FC) and Marta (Brazil and FC Rosengard).

Mary Hockaday, Controller of BBC World Service English, said: “Huge congratulations to Asisat Oshoala on winning the first BBC Women’s Footballer of the Year award. At still only 20, she’s proved herself a formidable talent on the pitch. I’m proud BBC World Service is supporting the women’s game and thrilled with the interest in the award. I look forward to seeing who comes through in next year’s shortlist.”

The youngest footballer to be shortlisted, Oshoala played at the Under-20 World Cup in Canada last summer where she was the tournament's leading scorer and voted best player.

Her performances led Nigeria to the final, where they were narrowly beaten by Germany. Oshoala was also a major influence in the senior Nigeria team, who won the African Women's Championship later in 2014, ensuring their qualification for this summer's World Cup.