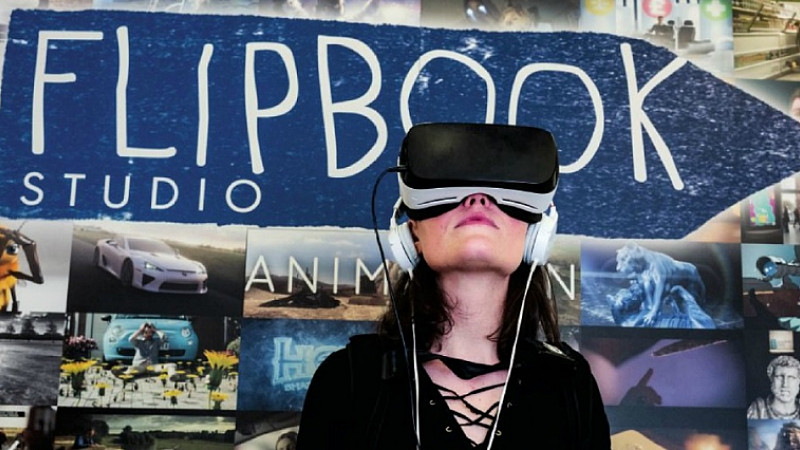 With the release of headsets from Sony, Google and Samsung, is virtual reality finally about to break into the mainstream?

Flipbook Studio’s founder, Andrew Lord believes that next year is a key one for mass take up of the new technology.

Experts agree that it will take off and go mainstream, albeit in a few years’ time and not immediately. I recently attended VR Connects in London and the general consensus appeared to be that 2018 is the likely year by which a majority of households will have a VR headset of sorts. There’s no doubting that the consumer market is excited about the emerging tech, particularly in the gaming community which will more than likely drive the tech’s popularity initially.

Playstation VR has seen good sales since its launch as a mid-priced headset but by far the biggest growth area is mobile based VR, currently catered for by the likes of Samsung’s Gear and Google’s Daydream headsets. Google cardboard is a cheap way to experience VR but I don’t class it as a fully- fledged VR headset.

Much depends on the development of the tech, making it more affordable, less bulky and improving resolution and image refresh rates. Good quality, entertaining content also needs to be made available. The good news is that unlike 3D TV where very little compatible content was created at time of launch, VR providers have worked with development studios, production companies and animation studios to make sure that content is readily available for their headsets before launch.

Are we physically ready for VR?

I can’t speak for everyone, as everyone experiences VR differently, but if an experience is well designed then absolutely we can cope. Most first time VR users we’ve initiated are blown away by the ‘immersiveness’ of the experiences. Issues with motion sickness crop-up occasionally and theories as to the causes tend to revolve around the screen resolution and image refresh rate not matching or being slower than how our brains actually process the images we see. Sudden camera moves therefore exacerbate this, although the camera moves themselves aren’t strictly to blame.

Good news is that screen technology is getting better and better and motion sickness is being reduced as refresh rates and resolutions improve at a rate of knots. In the meantime, we make sure all our VR experiences are well designed to be as immersive and vomit free as possible. We haven’t had anyone go a sickly shade of green yet.

Is price the only reason that VR hasn’t become mainstream?

Simply the cost barrier needs to come down and the hardware needs to keep on evolving so that it’s smaller, lighter and with better screen technology. Even though there’s a huge amount of financial muscle backing the development and exploration of VR’s potential, it still exists as a niche gamer technology to a lot of the public, particularly when looking at the hefty set-up costs to get a Vive or Rift up and running. Playstation VR is more accessible from a price perspective, is immensely good fun and offers more than just gaming, but you do need to purchase a Playstation to work it which non-gamers might not be inclined to do.

Mobile VR is likely to be the main driver for the industry. Samsung Gear and Google Daydream are great mobile headsets available now, that provides a more cost effective solution and caters for a plethora of great VR experiences other than just gaming. Google cardboard is there too but it isn’t really a VR headset and provides a much more gimmicky experience. It’s opened up VR to a larger number of people but the experience isn’t comparable to the headsets above.

Prices will come down as more phones become VR-ready, there are already a large number of different headset available and new content for the platforms is being produced rampantly.

Will VR really be about more than games?

Absolutely, we work with many games companies producing animated content, trailers and brand solutions for a variety of different titles but pretty much all the VR experiences we’ve created have been for either TV or advertising based productions. VR for advertising/marketing a product has been pretty mainstream for the past year or so and Broadcast TV/Film has moved past little bolt on VR experiences for main features, to fully fledged stand-alone VR narratives. I recommend checking out Notes on Blindness: Into Darkness, if you’ve got a Samsung Gear...very clever and visually moving stuff!

Do you see Mixed Reality developments like Hololens and Magic Leap taking over the hype from VR?

They’re two different things. VR is a 100% immersive, virtual, simulated experience, it places you in a different environment entirely to the real-world environment you’re standing in. Mixed Reality tech like Hololens and Magic Leap merge the digital world with the real-life world and integrate the two of them so that the digital world is anchored to the real. Like any new visual tech I’m sure MR platforms will become the talk of town, in some ways they already are. The service offering of both platforms is different though and the public will pick that up pretty quickly.

With the emergence of devices like Hololens, what can we expect from Mixed Reality in the years to come?

We’re playing around with this tech presently and the possibilities are very exciting. It really is a game changer and its potential applications are vast, too vast for me to cover here. A quick Google search will reveal some of the current thinking. I suspect it will tread a line similar to VR in that content needs to be created for the hardware platforms that currently exist, before more affordable headsets hit the market. The hardware is very pricey at the moment but that reflects just how young this technology is.

Andrew Lord is the founder of Flipbook Studio.