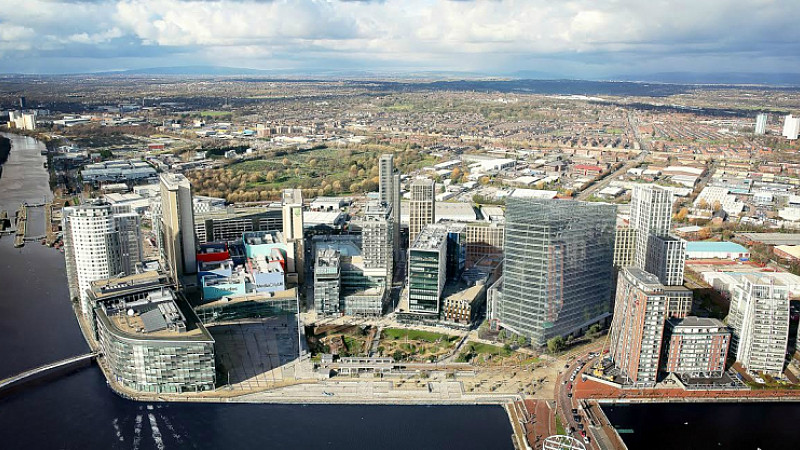 MediaCityUK is set to double in size over the next decade under ambitious plans that include 10 new buildings with a development value of over £1bn.

As unveiled in plans to be submitted to Salford City Council today, key features of phase two of MediaCityUK will include 50,000 m2 (540,000 sq ft) of offices, 1,800 apartments, retail and leisure, complemented by innovative public spaces with a pedestrian promenade running through the scheme.

Outline approval for the plans was granted in 2006. A condition of that permission was that detailed proposals, including all building designs and specifications, needed to be brought forward this year. The plans are expected to be considered by Salford’s planning panel in September.

MediaCityUK is a joint venture between Peel Land and Property and Legal and General Capital, who share a long-term commitment to the further expansion of a creative and digital hub which already houses 250 businesses including the BBC, ITV, dock10, Ericsson and SIS.

Steven Underwood, chief executive of The Peel Group, said: "This application is another major step forward in the evolution of MediaCityUK. Plans showing the site of the phase two buildings at MediaCityUK

"Our partnership with Legal and General Capital, alongside continued support from the public sector, provides a strong platform to deliver future development phases of the UK’s fastest growing hub for the creative and digital industries.

"MediaCityUK is a shining example of what can be achieved across the Northern Powerhouse, combining the talents of great people with ambition and vision."

Paul Stanworth, MD of Legal and General Capital, added: "Urban regeneration of the scale being delivered at MediaCityUK has the ability to make a sizeable economic impact, both locally and nationally.

"We hope to deliver much-needed homes, hubs for businesses and new retail, leisure and public spaces for residents, workers and visitors to enjoy."

Development at MediaCityUK continues apace with the new Tomorrow building coming on stream during the summer and The Lightbox apartment block due to commence construction in early 2017.

Stephen Wild, MD of MediaCityUK, said: "We pride ourselves on having created much-loved buildings such as The Pie Factory and The Greenhouse. Phase two will provide a unique opportunity for a new generation of designs to complement what is already a thriving and vibrant destination."