The Northern Marketing Awards 2013: A Review of the Night 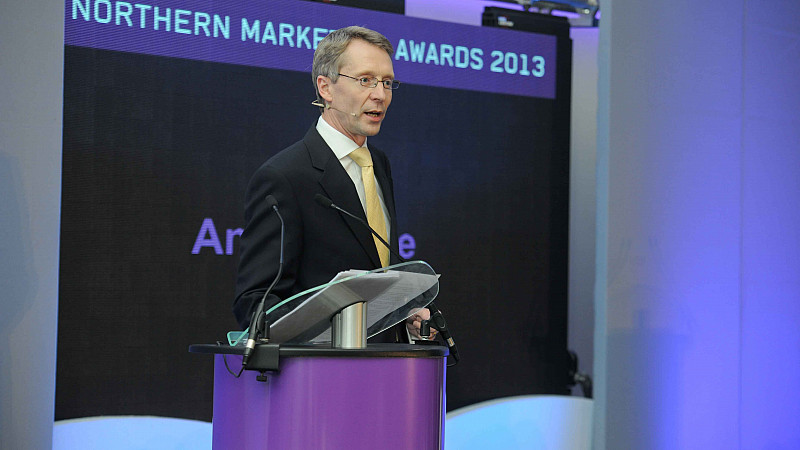 Three hundred of the finest marketers in the North gathered together at The Point at Lancashire County Cricket Club last night for a celebration of excellence, creativity and hard work.

And the inaugural running of the Northern Marketing Awards, with our headline partner Melbourne Server Hosting, will forever be associated with one particular company, whose journey from table to podium became perhaps the most travelled route of the night. Stein IAS, who had received a total of 13 nominations including five in one category alone, swelled their already bulging mantelpiece with six of the night's prized purple 'Big Ns'.

The Cheshire-headquartered B2B agency triumphed in the B2B, Health Sciences, Pharmaceuticals & Consumer Health Care, IT & Telecoms and Sustainable/Green categories, topping the night off with both the Best Large Agency award and the Grand Prix, for its Studio Bovine campaign.

Saving his speech for the very end, the agency's CEO for the EMEA and Asia region, Rob Morrice, punched the air as he declared himself thrilled with his team's night's work, adding that despite the increasingly globalised nature of the business, Stein IAS would "always" consider Cheshire its home.

In awarding it the title of Best Large Agency, the judges praised Stein's "consistently high standard of work and ambitious growth". Their citation continued: "As well as handling numerous large clients, they have also managed to maintain close relationships with over a hundred staff members as they’ve expanded from their Bollington HQ with offices in London, Paris and New York."

But despite the night belonging very much to Stein, there were many other fantastic stories of success to emerge across the 20 different categories for which marketers across the region were nominated - and that's not even accounting for host Andy Crane, who admirably battled on through the night despite an onset of a lurgy which he hoped was not an "allergy to cricket". Origin Creative's 'Sign for United' campaign, which allowed Manchester United fans to see what it really would be like to sign for their favourite team, took home the B2C prize. Judges hailed the way Origin had produced a "global idea at such a low cost", and pointed to the 160,000 signings (and counting) as evidence of the campaign's success.

PHD's IRN-BRU Gets You Through campaign earned the Drink category prize, with the judges highlighting not just the well-known TV ads but also its "great use of social media too, a brilliant viral video and strong engagement with consumers".

United Utilities' Think Before You Flush was not the night's most glamorous campaign, but One Marketing did not care about that as it picked up the Energy & Utilities category, with the judges impressed by the roadshow and use of Coronation Street star Samia Ghadie. "The timing on the campaign was impeccable," they agreed.

The true potential of marketing was brought home by the Not-for-Profit catagory, won by Profile Communication and Mid Cheshire Hospitals Trust for the One in Eleven Campaign. Sometimes success is measured in Facebook likes or profit margins, but on this occasion the metrics added up to a new neonatal unit being built much sooner than anticipated. The scene at The Point

The professional and financial services award, presented by Brother MD Phil Jones, went to North West law firm SAS Daniels, with the judges liking the way it had increased website visitors by 20% thanks to an "integrated marketing campaign encompassing free seminars, advertising and media coverage".

Rare Creative Group had made the trip over the Pennines from Sheffield and it proved to be worth it, with its Window of Opportunity campaign for PLANITHERM winning both the Property & Construction and Best Use of Research or Insight categories. The campaign showed "impeccable research of the market", the judges thought, with the results exceeding expectations.

A 700% increase in web traffic would be an award-winning results in most people's books, and that's certainly what convinced the judges to give Photolink Creative the nod in the Retail category. Its campaign for Regis UK "more than achieved the brief of amplifying the brand’s personality and industry expertise".

Cirrus is firmly based in Cheshire but it was its ‘Have A Brilliant Yorkshire’ campaign for Welcome to Yorkshire that caught the eye of the judges, who were impressed by a "flexible, creative concept that works across multiple platforms and audiences".

Perhaps the most enviable task of the night went to Ian Ratcliffe, head of communications at Stockport Metropolitan Borough Council, who was allowed to declare the words "Bravissimo's Boob School" in awarding the Low Budget category prize to Liquid Solution and Trumpet PR and Design. Judges were "extremely impressed" with the campaign's achievements, which they said found the "perfect angle" for the 100th anniversary of the invention of the modern bra.

The Mobile Marketing category went to MediaCom, who exceeded download expectations by a remarkable 1,000% with their app for The Co-operative, which aimed to expand awareness and reach of its Young Driver insurance.

Eight different campaigns were in line for the Social Media category, but it was Weber Shandwick's Mum & Me campaign for Cussons that stood out most to the judges, who praised the agency's "expert understanding of Twitter and Facebook".

Best In-House Team, meanwhile, went to Manchester City Council, who the judges felt had displayed "continued professionalism in the face of scrutiny, unprecedented cuts and drastic reductions in staff numbers".

A huge thanks once again to the night's headline sponsor Melbourne Server Hosting, as well as category sponsors Better Placed and theEword, Twitterfall maestros KMP Digitata and event organisers Don't Panic. Thanks also for the generosity of those who donated to the raffle, with over £1,000 raised for NABS.

The full list of award-winners and nominees can be seen here.